Russia repatriates 32 children of IS members from Iraq 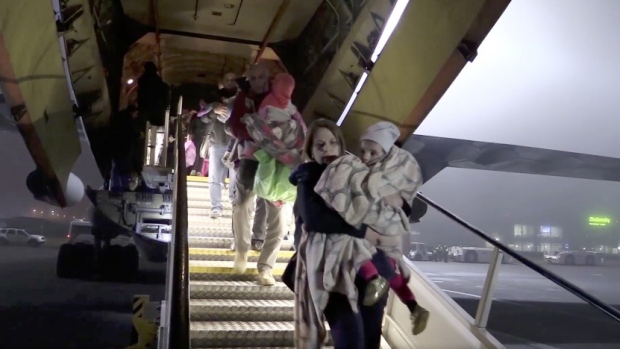 A photo taken from video shows Russian officials carrying children from a plane at Zhukovsky International Airport outside Moscow on Monday night.(Russian Ministry for Emergency Situations via Associated Press)

MOSCOW - Russia says it has repatriated another 32 children of members of the Islamic State group from Iraq.

Russia's state TV on Tuesday showed footage of the children arriving at Zhukovsky airport outside Moscow. It said the children aged between one and nine will undergo extensive medical check-ups before relatives take them home.

Russia's Foreign Ministry said the children had been held in asylum centres in Iraq or in prisons with their mothers.

Their arrival represents the fourth group of Russian children to be repatriated from Iraq. The Foreign Ministry said a total of 122 children have been brought home.

Russian President Vladimir Putin has said that over 4,000 Russian citizens and some 5,000 citizens of other ex-Soviet nations have joined the Islamic State group in Syria and Iraq.