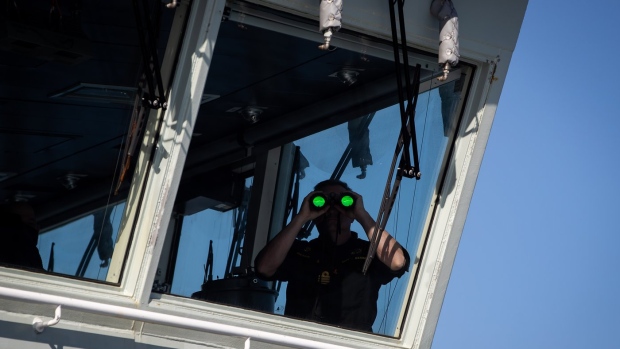 Cmdr. Corey Gleason, Commanding Officer of the Royal Canadian Navy's newest Arctic and Offshore Patrol Ship, HMCS Harry DeWolf, uses binoculars as he looks out from the bridge while travelling on the Salish Sea from Vancouver to Victoria, B.C., Sunday, Oct. 3, 2021. A senior Canadian military official says Russia has started sending long-range bombers back across the Arctic toward North America following a pause during the early months of its war in Ukraine. THE CANADIAN PRESS/Darryl Dyck

Russia has started sending long-range bombers back over the Arctic toward North American airspace following a short-lived pause during the early months of its war in Ukraine, according to a senior Canadian military official.

Russian submarines are also operating off both coasts as Moscow seeks to demonstrate its ability to strike Canada and the United States, said Lt.-Gen. Alain Pelletier, the deputy commander of the North American Aerospace Defence Command.

"We have seen a reduction this year, especially since the Feb. 24 illegal invasion of Ukraine by Russia. However, some of those activities have now resumed," Pelletier told the Senate defence committee on Monday.

"The activities are not only limited to the long-range aviation. Russia uses its submarines now both on the Atlantic coast and the Pacific coast to actually demonstrate its strategic capabilities and to present a threat to North America."

While Pelletier did not give more specific details, Norad officials announced last month that two long-range Russian bombers were intercepted by American fighter jets after approaching Alaska. The bombers did not enter North American airspace before leaving.

Pelletier and other defence officials also confirmed that Canada and the U.S. have started to work on modernizing Norad, the shared early-warning system that comprises North America's first line of defence against a foreign attack by air.

The Liberal government announced in June that Ottawa plans to invest $4.9 billion over six years and $40 billion over the next 20 years to upgrade the system in co-operation with Washington, D.C.

That includes replacing the string of 1980s-era radars in Canada’s north that form the backbone of this country’s contribution to Norad with more modern systems that can see farther and detect and track new types of weapons.

"We're at the very early stages," Defence Department official Jonathan Quinn said. "The announcement was in June, but we are setting up detailed plans with milestones, setting up project offices here at National Defence headquarters to advance the specific initiatives."

This comes as Russia and China, in particular, have started flexing their muscles in the Arctic and developing new weapons that can more easily strike North America, including cruise missiles and hypersonic weapons that fly extremely fast.

Yet while research and development on new radars and other equipment to find and stop such weapons is advancing quickly, Quinn told the committee that it will be some time before they are in the field.

Canada and the U.S. will be forced to rely on the threat of retaliation to prevent such attacks until then, Quinn added.

"During the gap period, we would be relying probably a little bit more heavily than we would like on the deterrence by punishment until we kind of reinforce those North American defences to bolster the defence deterrence by denial," he said.