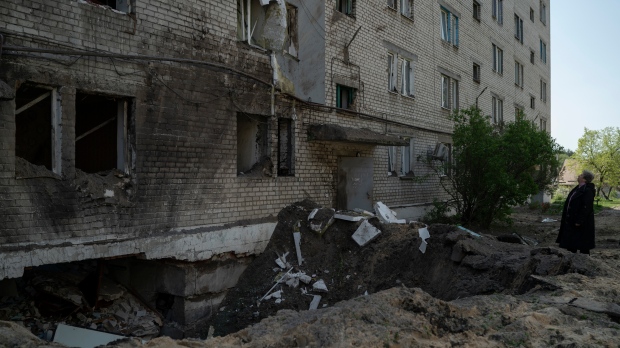 FILE - A woman stand next to a crater from an explosion that damaged an apartment and a basement of a residential building killing, according to the residents, a 8-year-old girl during a Russian attack yesterday in Lyman, Ukraine, Tuesday, April 26, 2022. (AP Photo/Leo Correa)

KYIV, Ukraine (AP) - After being encircled by Ukrainian forces, Russia pulled troops out Saturday from an eastern Ukrainian city that it had been using as a front-line hub. It was the latest victory for the Ukrainian counteroffensive that has humiliated and angered the Kremlin.

Russia's withdrawal from Lyman complicates its internationally vilified declaration just a day earlier that it had annexed four regions of Ukraine - an area that includes Lyman. Taking the city paves the way for Ukrainian troops to potentially push further into land that Moscow now illegally claims as its own.

The fighting comes at a pivotal moment in Russian President Vladimir Putin's war. Facing Ukrainian gains on the battlefield - which he frames as a U.S.-orchestrated effort to destroy Russia - Putin this week heightened threats of nuclear force and used his most aggressive, anti-Western rhetoric to date.

Russia's Defense Ministry claimed to have inflicted damage on Ukrainian forces in battling to hold Lyman, but said outnumbered Russian troops were withdrawn to more favorable positions. Kyiv's air force said it moved into Lyman, and the Ukrainian president's chief of staff posted photos of a Ukrainian flag being hoisted on the town's outskirts.

Lyman had been an important link in the Russian front line for both ground communications and logistics. Located 160 kilometers (100 miles) southeast of Kharkiv, Ukraine's second-largest city, it is in the Donetsk region near the border with Luhansk region, both of which Russia annexed Friday after a local “referendum” was held at gunpoint.

Ukrainian forces have retaken vast swaths of territory in a counteroffensive that started in September. They have pushed Russian forces out of the Kharkiv area and moved east across the Oskil River.

The leader of Chechnya, Ramzan Kadyrov, blamed the retreat, without evidence, on one general being “covered up for by higher-up leaders in the General Staff.” He called for “more drastic measures.”

Meanwhile, on the Russian-annexed Crimean Peninsula, the governor of the city of Sevastopol announced an emergency situation at an airfield there. Explosions and huge billows of smoke could be seen from a distance by beachgoers in the Russian-held resort. Authorities said a plane rolled off the runway at the Belbek airfield and ammunition that was reportedly on board caught fire.

Russia annexed the Black Sea peninsula of Crimea from Ukraine in 2014 in violation of international law.

Russian bombardments have intensified in recent days as Moscow moved swiftly with its latest annexation and ordered a mass mobilization at home to bolster its forces. The Russian call-up has proven unpopular at home, prompting tens of thousands of Russian men to flee the country.

Ukraine's president, Volodymyr Zelenskyy, and his military have vowed to keep fighting to liberate the regions Putin claimed to have annexed Friday, and other Russian-occupied areas.

The governor of the Kharkiv region, Oleh Syniehubov, said 24 civilians were killed in an attack this week on a convoy trying to flee the Kupiansk district. He called it “Ñruelty that can't be justified.” He said 13 children and a pregnant woman were among the dead.

“The Russians fired at civilians almost at point-blank range,” Syniehubov wrote on Telegram.

The Security Service of Ukraine, the secret police force known by the acronym SBU, posted photographs of the attacked convoy. At least one truck appeared to have been blown up, with burned corpses in what remained of its truck bed. Another vehicle at the front of the convoy also had been ablaze. Bodies lay on the side of the road or still inside vehicles, which appeared pockmarked with bullet holes.

Russia's Defense Ministry said its rockets destroyed Ukrainian military targets in the area but has not commented on accusations that it targeted fleeing civilians. Russian troops have retreated from much of the Kharkiv region but they have continued to shell the area.

In other developments, in an apparent attempt to secure Moscow's hold on the newly annexed territory, Russian forces seized the director-general of the Zaporizhzhia Nuclear Power Plant, Ihor Murashov, on Friday, according to the Ukrainian state nuclear company Energoatom.

Energoatom said Russian troops stopped Murashov's car, blindfolded him and took him to an undisclosed location.

Russia did not publicly comment on the report. The International Atomic Energy Agency said Russia told it that “the director-general of the Zaporizhzhia nuclear power plant was temporarily detained to answer questions.”

The Vienna-based IAEA said it “has been actively seeking clarifications and hopes for a prompt and satisfactory resolution of this matter.”

The power plant repeatedly has been caught in the crossfire of the war. Ukrainian technicians continued running it after Russian troops seized the power station, and its last reactor was shut down in September as a precautionary measure amid ongoing shelling nearby.

In other fighting reported Saturday, four people were killed by Russian shelling Friday in the Donetsk region, governor Pavlo Kyrylenko said. The Russian army struck the southern Ukrainian city of Mykolaiv twice overnight, once with drones and the second time with missiles, according to regional Gov. Vitaliy Kim.

After Friday's land grab, Russia now claims sovereignty over 15% of Ukraine, in what NATO Secretary-General Jens Stoltenberg called “the largest attempted annexation of European territory by force since the Second World War.”

In Washington, President Joe Biden signed a bill Friday that provides another infusion - more than $12.3 billion - in military and economic aid linked to the war Ukraine.