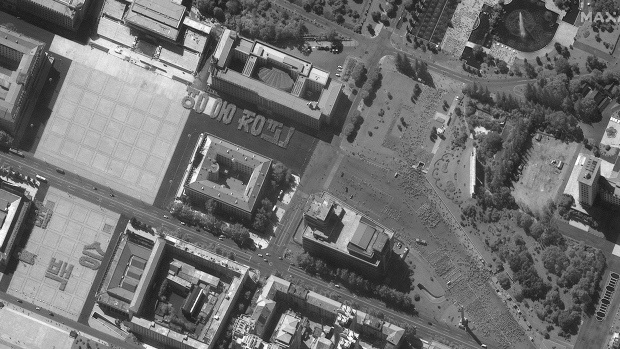 SEOUL, Korea, Republic Of -- North Korea is preparing for a massive military parade in its capital to mark the 75th anniversary of its ruling party next month, satellite images indicated Friday, even as the country strengthens its anti-coronavirus measures.

The images, provided by Maxar, a Colorado-based satellite imagery company, show thousands of people assembled in formation near Pyongyang's Kim Il Sung Square and rehearsing for a military parade. The anniversary of the founding of the ruling Workers' Party is on Oct. 10.

North Korea insists it hasn't had any coronavirus cases, a claim widely disputed by many foreign experts.

On Monday, the North's Korean Central News Agency said the country is intensifying its emergency anti-coronavirus efforts. It said authorities are trying to boost the anti-pandemic atmosphere to ensure that the anti-virus campaign "is waged consistently without a moment's indolence, slackness and carelessness."

North Korean leader Kim Jong Un has called for strong unity among the country's 25 million people as it faces multiple crises including the pandemic, damage from a recent typhoon, and ongoing U.S.-led economic sanctions. He closed the country's border with China, its biggest trading partner, in January over virus concerns. Experts say the border closure has likely worsened North Korea's already-troubled economy.

Earlier this week, the nominee for chairman of South Korea's Joint Chiefs of Staff told lawmakers that North Korea might conduct its first underwater ballistic missile test in about a year ahead of the Oct. 10 ruling party anniversary.