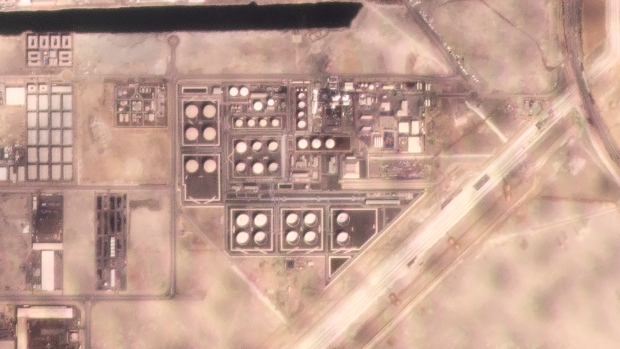 The images by Planet Labs PBC analyzed by the AP show smoke rising over an Abu Dhabi National Oil Co. fuel depot in the Mussafah neighborhood after the attack. Another image taken shortly after appears to show scorch marks and white fire-suppressing foam deployed on the grounds of the depot.

The Abu Dhabi National Oil Co., known by the acronym ADNOC, is the state-owned energy firm that provides much of the wealth of the UAE, a federation of seven sheikhdoms on the Arabian Peninsula and also home to Dubai.

ADNOC did not respond to questions from the AP asking about the site and damage estimates from the attack. The company had said the attack happened around 10 a.m. Monday.

“We are working closely with the relevant authorities to determine the exact cause and a detailed investigation has commenced,” ADNOC said in an earlier statement.

The attack killed two Indian nationals and one Pakistani. Three tankers at the site exploded, police said. Six people were also wounded at the facility, which is near Al-Dhafra Air Base, a massive Emirati installation that is also home to American and French forces.

Another fire struck Abu Dhabi International Airport, though damage in that attack could not be seen. Journalists have not been able to view the sites attacked and state-run media have not published photographs of the areas.

Police described the assault as a suspected drone attack. Yemen's Houthis claimed they used cruise and ballistic missiles in the attack, without offering evidence.

The Saudi-led coalition fighting in Yemen said Tuesday it started a bombing campaign targeting Houthi sites in Sanaa and struck a drone-operating base in Nabi Shuaib Mountain, near the Yemeni capital.

Overnight videos released by the Houthis showed damage, with the rebels saying the airstrikes killed at least 14 people. Sanaa resident Hassan al-Ahdal said one airstrike hit the house of Brig. Gen. Abdalla Kassem al-Junaid, who heads the Air Academy. He said at least three families were living in the house. Another adjunct house with a four-member family was damaged.

The office of U.N. High Commissioner for Human Rights said five civilians were among the dead. The Saudi-led coalition has faced international criticism for airstrikes hitting civilian targets during the war.

Later Tuesday, UAE's ambassador to the United Nations called for an emergency meeting of the U.N. Security Council “to address the Houthi terrorist attacks in Abu Dhabi.” Ambassador Lana Nusseibeh strongly condemned “the Houthis' targeting of civilians and civilian objects in flagrant violation of international law.”

“This illegal and alarming escalation is a further step in the Houthis' efforts to spread terrorism and chaos in our region,” she said. “It is another attempt by the Houthis, using the capabilities they have unlawfully acquired in defiance of U.N. sanctions, to threaten peace and security.”

Norway, which holds the rotating Security Council presidency this month, said it is consulting other council members on a meeting.

For hours Monday, Emirati officials did not acknowledge the Houthi claims over the Abu Dhabi attack, even as other countries condemned the assault. Senior Emirati diplomat Anwar Gargash broke the silence on Twitter, saying that Emirati authorities were handling the rebel group's “vicious attack on some civilian facilities” with “transparency and responsibility.”

The office of South Korean President Moon Jae-in, who had been in the Emirates on a state visit, said he spoke to Abu Dhabi's powerful Crown Prince, Sheikh Mohammed bin Zayed Al Nahyan, immediately after the attack. The two had been scheduled to meet during Moon's visit but the event had been cancelled prior to the attack over an “unforeseen and urgent matter of state,” according to Moon's office.

The Emirati Foreign Ministry did not respond to a request for comment over Moon's statement. However, the state-linked newspaper The National in an editorial Tuesday called the Houthis “an extremist organization reliant on terrorism and, most of all, fear.” It said the Houthis' “attempts to bring that fear to Abu Dhabi failed as the explosions were swiftly brought under control.”

Concerns over future attacks reaching the UAE, a major oil producer and OPEC member, helped push Brent crude oil prices to their highest level in seven years. On Tuesday, a barrel of Brent crude traded at over $87.50 a barrel, a price unseen since October 2014.

“The damage to the UAE oil facilities in Abu Dhabi is not significant in itself, but it raises the question of even more supply disruptions in the region in 2022,” said Louise Dickson, an analyst at Rystad Energy.

Although the UAE has largely withdrawn its own forces from Yemen, it is still actively engaged in the conflict and supports Yemeni militias fighting the Houthis.

The incident comes as the Houthis face pressure and are suffering heavy losses on the battlefields. Yemeni government forces, allied and backed by the UAE, have pushed back the rebels in key provinces. Aided by the Emirati-backed Giants Brigades, the government forces took back the province of Shabwa earlier this month in a blow to Houthi efforts to complete their control of the entire northern half of Yemen.

While Emirati troops have been killed over the course of the conflict, now in its eight year, the war has not directly affected daily life in the wider UAE, a country with a vast foreign workforce.