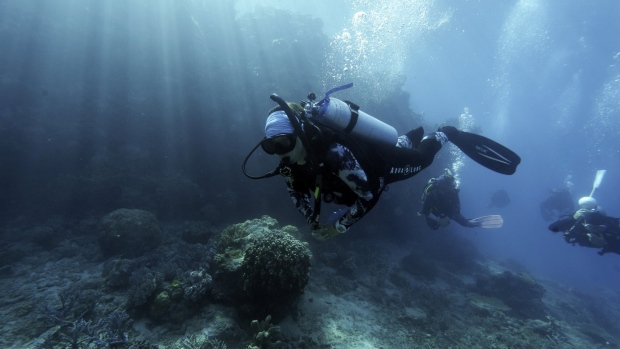 Tess Concannon, center, marine biologist and project manager for Reef Cooperative, leads a dive along Moore Reef in Gunggandji Sea Country off coast of Queensland in eastern Australia on Nov. 15, 2022. The Great Barrier Reef, battered but not broken by climate change impacts, is inspiring hope and worry alike as researchers race to understand how it can survive a warming world. (AP Photo/Sam McNeil)

KONOMIE ISLAND, Australia (AP) — Below the turquoise waters off the coast of Australia is one of the world’s natural wonders, an underwater rainbow jungle teeming with life that scientists say is showing some of the clearest signs yet of climate change.

The Great Barrier Reef, battered but not broken by climate change impacts, is inspiring hope and worry alike as researchers race to understand how it can survive a warming world. Authorities are trying to buy the reef time by combining ancient knowledge with new technology. They are studying coral reproduction in hopes to accelerate regrowth and adapt it to handle hotter and rougher seas.

Underwater heat waves and cyclones driven in part by runaway greenhouse gas emissions have devastated some of the 3,000 coral reefs making up the Great Barrier Reef. Pollution fouls its waters, and outbreaks of crown of thorns starfish have ravaged its corals.

Researchers say climate change is already challenging the vibrant marine superstructure and all that depend upon it — and that more destruction is to come.

“This is a clear climate change signal. It’s going to happen again and again,” said Anne Hoggett, director of the Lizard Island Research Station, on the continuing damage to the reef from stronger storms and marine heat waves. “It’s going to be a rollercoaster.”

Billions of microscopic animals called polyps have built this breathtaking 1,400-mile long colossus that is visible from space and perhaps a million years old. It is home to thousands of known plant and animal species and boasts a $6.4 billion annual tourism industry.

“The corals are the engineers. They build shelter and food for countless animals,” said Mike Emslie, head of the Long-Term Monitoring Program of the reef at the Australian Institute for Marine Science.

Emslie's team have seen disasters get bigger, and hit more and more frequently over 37 years of underwater surveys.

Heat waves in recent years drove corals to expel countless tiny organisms that power the reefs through photosynthesis, causing branches to lose their color or “bleach.” Without these algae, corals don’t grow, can become brittle, and provide less for the nearly 9,000 reef-dependent species. Cyclones in the past dozen years smashed acres of corals. Each of these were historic catastrophes in their own right, but without time to recover between events, the reef couldn’t regrow.

In the last heat wave however, Emslie’s team at AIMS noticed new corals sprouting up faster than expected.

“The reef is not dead,” he said. “It is an amazing, beautiful, complex, and remarkable system that has the ability to recover if it gets a chance – and the best way we can give it a chance is by cutting carbon emissions.”

The first step in the government’s reef restoration plan is to understand better the enigmatic life cycle of the coral itself.

For that, dozens of Australian researchers take to the seas across the reef when conditions are ripe for reproduction in a spawning event that is the only time each year when coral polyps naturally reproduce as winter warms into spring.

But scientists say that is too slow if corals are to survive global warming. So they don scuba gear to gather coral eggs and sperm during the spawning. Back in labs, they test ways to speed up corals’ reproductive cycle and boost genes that survive higher temperatures.

One such lab, a ferry retrofitted into a "sci-barge", floats off the coast of Konomie Island, also known as North Keppel Island, a two-hour boat ride from the mainland in Queensland state.

One recent blustery afternoon, Carly Randall, who heads the Woppaburra Coral Project at AIMS, stood amidst buckets filled with coral specimens and experimental coral-planting technologies. She said the long-term plan is to grow “tens to hundreds of millions” of baby corals every year and plant them across the reef.

Randall compared it to tree-planting with drones but underwater.

Her colleagues at AIMS have successfully bred corals in a lab off-season, a crucial first step in being able to at scale introduce genetic adaptions like heat-resistance.

Engineers are designing robots to fit in a mothership that would deploy underwater drones. Those drones would attach genetically-selected corals to the reef with boomerang-shaped clips. Corals in specific targets will enhance the reef’s “natural recovery processes” which would eventually “overtake the work that we’ve been doing to keep it going through climate change,” she said.

Australia has recently been slammed by historic wildfires, floods, and cyclones exacerbated by climate instability.

That has driven a political shift in the country as voters have grown more concerned with climate change, helping sweep in new national leadership in this year’s federal elections, said Bill Hare, CEO of Climate Analytics.

The nation’s previous prime minister, Scott Morrison, was a conservative who was chided for minimizing the need to address climate change.

The new center-left government of Anthony Albanese passed legislation to reach net zero carbon emissions by 2050 and includes 43% green house gas reductions by 2030. Australia is one of the world’s largest exporters of coal and liquefied natural gas, and lags behind major industrial countries' emission targets.

The new government has blocked a coal plant from being opened near the Great Barrier Reef, yet recently allowed other coal plants new permits.

It is also continuing investment to boost the reef’s natural ability to adapt to rapidly warming climate.

The Italy-sized reef is managed like a national park by the Great Barrier Reef Marine Park Authority.

However, that is today, in a world warmed about 1.1 degrees Celsius (2 degrees Fahrenheit).

“As we approach two degrees (Celsius) and certainly as we pass it, we will lose the world’s coral reefs and all the benefits that they give to humanity," Wachenfeld said. He added that as home to over 30% of marine biodiversity, coral reefs are essential for the livelihoods of hundreds of millions of people all over the tropics.

The reef is “part of the national identity of Australians and of enormous spiritual and cultural significance for our First Nations people,” Wachenfeld said.

After long mistreatment and neglect by the federal government, Indigenous groups now have a growing role in management of the reef. The government seeks their permission for projects there and hires from the communities to study and repair it.

Multiple members of the Yirrganydji and Gunggandji communities work as guides, sea rangers and researchers on reef protection and restoration projects.

“That connection is ingrained in our DNA,” said Singleton, who is from the Yirrganydji people native to the area around Cairns. He now works as a cultural officer with Reef Cooperative, a joint venture of tourism agencies, the government and Indigenous groups.

“Utilizing that today can actually preserve what we have for future generations.”

For now, reef-wide farming and planting corals is plausible science fiction. It's too expensive now to scale up to levels needed to “buy the reef time” as humanity cuts emissions, Randall said.

But she said that within 10 to 15 years the drones could be in the water.

But Randall warns that robots, coral farms and skilled divers “will absolutely not work if we don’t get emissions under control.”

“This is one of many tools in the toolkit being developed," she said. "But unless we can get emissions under control, we don’t have much hope for the reef ecosystem."