Separatists in Iran kill up to 19, including Guard commander 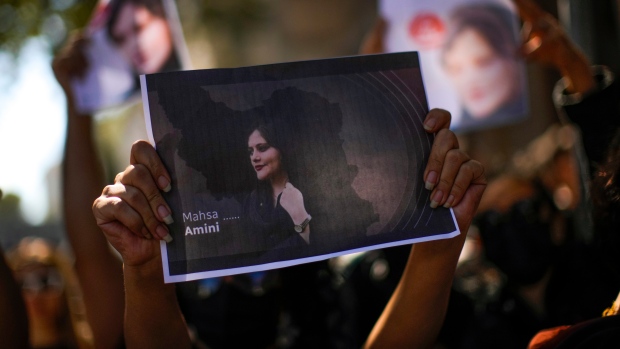 FILE - A woman holds a a photo of Iranian Mahsa Amini during a protest against her death, outside Iran's general consulate in Istanbul, Turkey, Wednesday, Sept. 21, 2022. (AP Photo/Francisco Seco)

DUBAI, United Arab Emirates (AP) - Iranian state-linked media reported late Friday that up to 19 people, including a commander in the paramilitary Revolutionary Guard, were killed in an attack by armed separatists on a police base in the eastern city of Zahedan.

It was not immediately clear if the attack, which unfolded earlier in the day as crowds had gathered at a nearby mosque for Friday prayers, was related to the nationwide antigovernment protests gripping Iran. The reports did not identify the separatist group.

In a separate development, Iran said it has arrested nine foreigners linked to the protests, which authorities have blamed on hostile foreign entities, without providing evidence.

State TV said armed separatists concealed themselves among worshippers and attacked a police base near the mosque in Zahedan. The state-run IRNA news agency cited witnesses as saying that 19 people were killed and 15 wounded, but there was no official confirmation.

The semiofficial Tasnim news agency reported that the head of the Guard's intelligence department, Seyyed Ali Mousavi, was shot during the attack and later died.

The Sistan and Baluchestan province borders Afghanistan and Pakistan, and has seen previous attacks on security forces by ethnic Baluchi separatists.

Thousands of Iranians have taken to the streets over the last two weeks in protests over the death of Mahsa Amini, a 22-year-old woman who had been detained by the morality police in the capital, Tehran, for allegedly wearing her mandatory Islamic headscarf too loosely.

The protesters have vented anger over the treatment of women and wider repression in the Islamic Republic. The nationwide demonstrations rapidly escalated into calls for the overthrow of the clerical establishment that has ruled Iran since its 1979 Islamic revolution.

The protests have drawn supporters from various ethnic groups, including Kurdish opposition movements in the northwest that operate along the border with neighboring Iraq. Amini was an Iranian Kurd, and the protests first erupted in Kurdish areas.

Iran's Intelligence Ministry said the nine foreigners arrested include citizens of Germany, Poland, Italy, France, the Netherlands and Sweden, state news agency IRNA reported. It was not immediately clear if they were Iranians with dual citizenship.

The ministry did not provide evidence for any of its claims.

Iran has detained a number of Iranians with dual citizenship over the years, accusing them of spying or otherwise undermining national security. Critics accuse Iran of using such detainees as bargaining chips to secure concessions from the international community.

A number of Europeans were detained in Iran in recent months, including a Swedish tourist, a Polish scientist and others. Two French citizens arrested in June are accused of meeting with protesting teachers and taking part in an antigovernment rally.

The London-based rights group said security forces have killed at least 52 people since protests over the Amini's death began nearly two weeks ago, including by firing live ammunition into crowds and beating protesters with batons.

It says security forces have also beaten and groped female protesters who remove their headscarves to protest the treatment of women by Iran's theocracy.

Amnesty said it obtained a leaked copy of an official document saying that the General Headquarters of the Armed Forces ordered commanders on Sept. 21 to “severely confront troublemakers and anti-revolutionaries.” The rights group says the use of lethal force escalated later that evening, with at least 34 people killed that night alone.

It said another leaked document shows that, two days later, the commander in Mazandran province ordered security forces to “confront mercilessly, going as far as causing deaths, any unrest by rioters and anti-Revolutionaries,” referring to those opposed to Iran's 1979 Islamic Revolution, which brought the clerics to power.

Amnesty did not say how it acquired the documents. There was no immediate comment from Iranian authorities.

Iranian state TV has reported that at least 41 protesters and police have been killed since the demonstrations began Sept. 17. An Associated Press count of official statements by authorities tallied at least 14 dead, with more than 1,500 demonstrators arrested.

The New York-based Committee to Protect Journalists says at least 28 reporters have been arrested.

That makes it difficult to gauge the extent of the protests, particularly outside the capital, Tehran. Iranian media have only sporadically covered the demonstrations.

Iranians have long used virtual private networks and proxies to get around the government's internet restrictions.

Shervin Hajipour, an amateur singer in Iran, recently posted a song on Instagram based on tweets about Amini that received more than 40 million views in less than 48 hours before it was taken down. Iran Human Rights Organization, a group based in Norway, said that Hajipour has reportedly been arrested. There was no official confirmation.