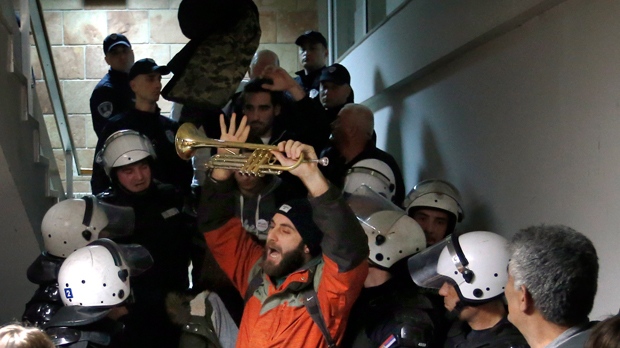 Helmeted and baton-wielding riot police arrived at the scene in the Serbian capital and tried to evict hundreds of people, including some opposition leaders, who had entered the downtown building. Some protest leaders said they won't leave until they are given time on the main evening news.

There were reports of injuries during the scuffles. Thousands of opposition supporters who gathered in front of the building chanted to the police officers: “shame on you, arrest Vucic!”

Serbian Interior Minister Nebojsa Stefanovic warned the protesters to leave the TV building or police would move in to “protect all Serbian TV journalists.”

Serbian Defence Minister Aleksandar Vulin told the pro-government Pink TV that the protesters are “fascists” who should be severely punished.

This was the first major incident after months of peaceful protests against populist leader Vucic. The demonstrators are demanding his resignation, free elections and media, and more democracy. The protests began after thugs beat up an opposition politician in November. A former extreme nationalist, Vucic has said he wants to lead Serbia into the European Union.

Some 10,000 others also demonstrated Saturday against long-serving Montenegrin President Milo Djukanovic in the Montenegrin capital of Podgorica.

Djukanovic and his party have ruled Montenegro virtually unchallenged for three decades. He led the country to independence from much larger Serbia in 2006 and defied Russia to join NATO in 2017.

Both Vucic and Djukanovic have rejected calls to resign.