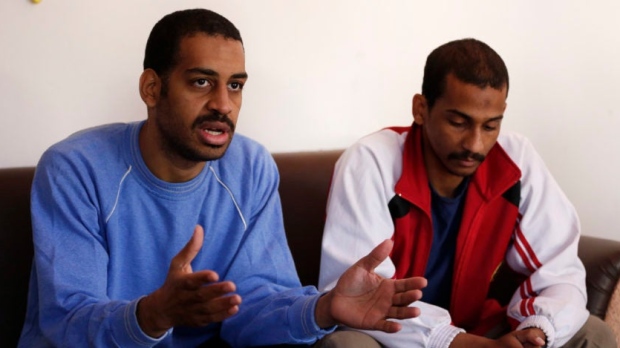 FILE - In this March 30, 2019, file photo, Alexanda Amon Kotey, left, and El Shafee Elsheikh, who were allegedly among four British jihadis who made up a brutal Islamic State cell dubbed "The Beatles," speak during an interview with The Associated Press at a security center in Kobani, Syria, Friday, March 30, 2018. The men said that their home country's revoking of their citizenship denies them a fair trial. "The Beatles" terror cell is believed to have captured, tortured and killed hostages including American, British and Japanese journalists and aid workers. (AP Photo/Hussein Malla, File) –The Associated Press

WASHINGTON - An American woman whose son was killed by the Islamic State said Thursday that she is hopeful the transfer to U.S. custody of two British militants brings them a step closer to criminal charges.

Diane Foley told The Associated Press that she would like to see the men prosecuted in the United States for their involvement with the Islamic State cell that killed Western hostages, including her son, James, a journalist who was beheaded in Syria in August 2014.

“We need some semblance of justice for the horrific execution and torture of the Americans,” Foley said.

El Shafee Elsheikh and Alexanda Amon Kotey were transferred to U.S. custody as Turkey invaded Syria to attack Kurds who have battling the Islamic State alongside American forces.

The two were among a cell dubbed “the Beatles” by some of their victims because of their British accents. The group was responsible for the beheading deaths of multiple Americans as the Islamic State ascended in power in Syria. The militant responsible for Foley's death, Mohammed Emwazi, was later killed in a U.S. airstrike. Elsheikh and Kotey were captured in eastern Syria last year by the Kurdish-led, U.S.-backed Syrian Democratic Forces amid the collapse of IS.

Foley said she and relatives of Kayla Mueller, another American hostage who died at the hands of the Islamic State, met earlier this year with Attorney General William Barr to discuss the “Beatles.”

“He was very concerned about this issue and concerned that they be held accountable for their horrible crimes,” Foley said.