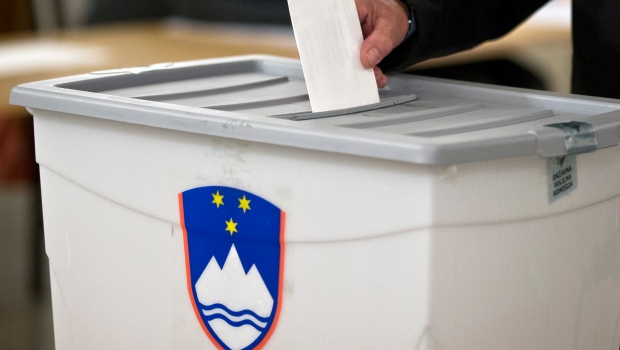 In this Sunday, Oct. 22, 2017 file photo, a voter casts his ballot at a polling station in Sempetr Pri Gorici, Slovenia. Slovenia is holding a runoff presidential election on Sunday, Nov. 12, 2017, that is pitting President Borut Pahor against a challenger Marjan Sarec, a former actor. (AP Photo/Darko Bandic, file)

BLED, Slovenia -- Slovenia is holding a runoff presidential election on Sunday that is pitting President Borut Pahor against challenger Marjan Sarec, a former actor who is the mayor of the northern town of Kamnik.

Pahor, a veteran politician, has been favoured to win after leading the vote by a large margin in the first round of balloting on Oct. 22. But analysts say it could be a tight race: Sarec has already surprised Pahor by forcing a runoff, and has narrowed the gap since the first round.

Below is some background on the race being decided in nature-loving Slovenia, the home country of U.S. first lady Melania Trump:

A former fashion model, Pahor has been in politics for decades, holding a number of public positions.

He was Slovenia's prime minister before he took office as president in December 2012.

Pahor, who turned 54 earlier this month, has sought to portray himself as a president of all Slovenians, regardless of their political preferences. Critics say, however, that Pahor is simply avoiding taking a stand on important issues. He has been nicknamed Slovenia's "King of Instagram" for his frequent presence on social media.

Pahor's opponent, Marjan Sarec, is an ambitious opponent who has won support from many Slovenians fed up with the political elite in the small EU state.

Sarec was a well-known satirical comedian who imitated politicians before entering politics himself in 2010 to run for mayor of Kamnik. Sarec won against an established candidate and gave up acting so he could fully commit to the job. The 39-year-old is currently serving his second term as mayor.

Pre-election surveys have suggested that Pahor could win some 56 per cent of the votes, and Sarec around 44. Pahor finished first among nine candidates in the first round of voting in October with 47 per cent -- not enough to avoid a runoff -- while Sarec had 25 per cent.

WHY THE VOTE MATTERS

Slovenia's presidency holds no executive powers. However, the president proposes the prime minister who runs the government and the office-holder's opinions carry weight on important issues.

Key topics facing Slovenia include the economy, a border dispute with neighbouring Croatia stemming from the 1990s' breakup of the former Yugoslavia, the future of the European Union, the large numbers of migrants and refugees who have reached Europe or are attempting to.

Slovenia, which has a population of around 2 million, has about 1.7 million voters. Polling places are set to open Sunday at 0600 GMT (1 a.m.) and close 12 hours later. Initial results are expected a few hours after the polls close.