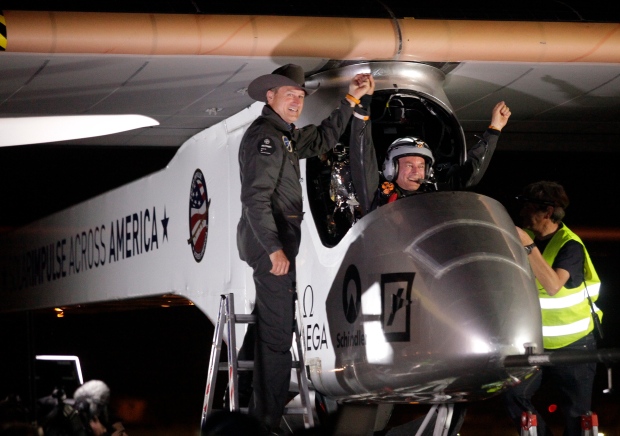 PHOENIX -- A solar-powered airplane landed in Phoenix early Saturday morning after a flight from California that included several hours in the air after sundown.

The Solar Impulse set down about 12:30 a.m. at Sky Harbor Airport after flying, completing the first leg of a planned cross-country U.S. trip that its co-pilot described as a "milestone" in aviation history.

The plane has previously impressed audiences in Europe, but its creators said the trip is the first attempt by a solar airplane capable of flying day and night without fuel to fly across America.

Video posted on the expedition's website showed a smiling pilot Bertrand Piccard shortly after landing as he waved to well-wishers and held up a flag emblazoned with the Solar Impulse name.

"It's a little bit like being in a dream," Piccard said as he stepped on the tarmac.

From Phoenix, it plans to travel to Dallas-Fort Worth airport in Texas, Lambert-St. Louis airport, Dulles airport in the Washington area and New York's John F. Kennedy airport. Each flight leg will take about 19 to 25 hours, with 10-day stops in each city.

"All the big pioneers of the 20th century have tried to fly coast to coast across America," co-pilot and one of the plane's founders, Piccard, said before the flight. "So now today we're trying to do this, but on solar power with no fuel with the first airplane that is able to fly day and night just on solar power."

The plane is powered by about 12,000 photovoltaic cells that cover massive wings and charge its batteries.

The delicate, single-seat Solar Impulse flies around 40 mph (64 kph) and can't go through clouds. It weighs about as much as a car, making it vulnerable to bad weather.

Its creators said solar planes will never replace fuel-powered commercial flights. But the goal is to showcase the potential of solar power.

"What we look for is to have a new milestone in this very exciting history of aviation that can attract interest of the people, of the political world, of the media and show that with renewable energies and clean technology for energy efficiency, we can achieve impossible things," Piccard said.