Some Americans will travel to Canada for abortions after Roe decision: advocates 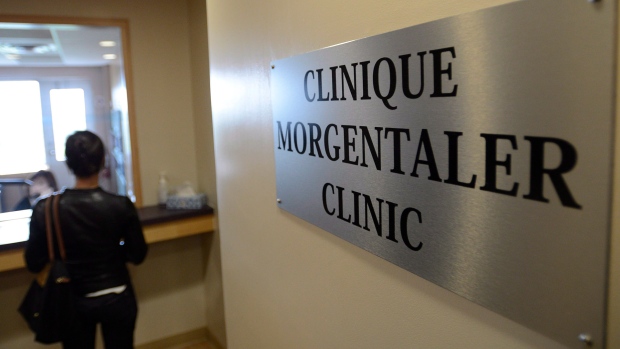 A woman enters the Morgentaler clinic in Montreal, Wednesday, May 29, 2013. THE CANADIAN PRESS/Ryan Remiorz

Canada should be prepared for a potential rise in medical tourism as abortion becomes banned in some U.S. states, say advocates and providers.

The U.S. Supreme Court ruled Friday to overturn Roe v. Wade, the 1973 decision that had provided a constitutional right to abortion. The ruling is expected to lead to abortion bans in roughly half the states, including some along the U.S.-Canada border.

The decision has raised concerns among some abortion providers and advocates about how a possible influx of Americans could impact Canada's system.

But the option to come north for an abortion is limited to those who can afford it, said Jill Doctoroff, executive director of the National Abortion Federation Canada.

The effort and expense involved in procuring a passport and travelling to Canada will likely be prohibitive for the marginalized Americans most affected by abortion bans, including those experiencing poverty and systemic racism, Doctoroff said. Many people may decide it's more practical to head to a U.S. state where abortion is still allowed, she said.

“People who tend to be involved in (medical) tourism are often people who are really privileged,” Doctoroff said by phone from Victoria. “Those are the kinds of people I think who might be coming to Canada for abortion care.”

But even a small number of Americans with the means to seek abortion care in Canada could pose a problem for clinics that are already strained for capacity, and potentially extend wait times, said Doctoroff.

Dr. Dustin Costescu, an obstetrician-gynecologist at Hamilton Health Sciences, said provinces should increase funding for abortion clinics to ensure they can meet this potential surge in demand.

“If a significant minority of Americans choose to come here ... very quickly the system could become overwhelmed by an influx of U.S. citizens,” said Costescu. “Now really is the time to be preparing for this.”

The clinic currently performs more abortions than it receives funding for, Nembhard said, and is considering extending its hours of operation if demand increases.

“We have contingency plans in place,” said Nembhard. “But we can't really put them into action until we actually see what's going to happen.”

But Canada should still take action to make abortions more accessible for its residents and potential visitors, including training more health workers on how to provide these services, said Paynter.

“We should be doing the work to improve access here, so that should U.S. patients arrive at our doors, we are very well equipped to handle it,” Paynter said. “Should they not, then we've made inroads that we can be proud of to continue to expand access in the first country to decriminalize abortion in the world.”