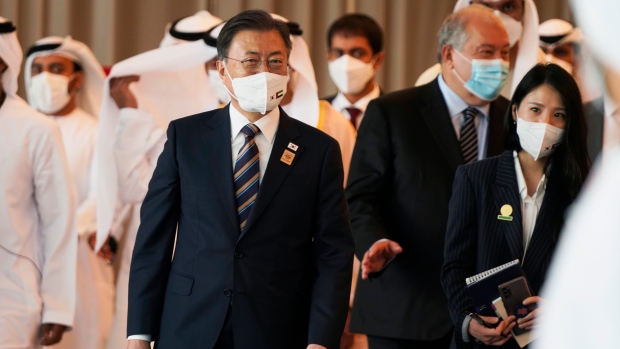 The visit was the second stop on a Mideast tour by South Korean President Moon Jae-in and his wife, who were greeted on the tarmac by Saudi Crown Prince Mohammed bin Salman and an honor guard marching band. All were masked and Moon did not shake hands with the prince, in line with coronavirus social distancing practices.

The preliminary deal centers on developing a project in Saudi Arabia to produce green hydrogen for export, according to the state-owned Saudi Press Agency. Supporters of green hydrogen tout it as a less carbon intensive way to power transportation and curb some of the environmentally destructive impacts of burning gasoline and diesel fuel.

South Korea has been pushing ahead with plans to cut its greenhouse gas emissions and aims to be carbon neutral by 2050. Saudi Arabia, one of the world's biggest oil and gas producers, last year announced its pledge to reach net-zero by 2060.

Still, both nations deeply depend on oil and gas. Relations between South Korea and Saudi Arabia date to the early 1960s, and have been underpinned since by South Korea's reliance on energy imports to power its manufacturing industries and refineries.

“South Korea has a strength in utilizing hydrogen, has world-leading technologies for fuel-cell batteries used in hydrogen cars, and also has plans to build the world's largest liquified hydrogen plant. If Saudi Arabia's ability to produce green and blue hydrogen combines with South Korea's ability to utilize hydrogen, the two countries could jointly lead the global hydrogen economy,” Moon said at a business forum following his talks with Prince Mohammed.

Around a third of South Korea's oil imports are from Saudi Arabia, making the kingdom Seoul's top supplier of crude.

Although the Saudi economy remains heavily reliant on oil and gas exports for revenue, the crown prince's Vision 2030 plan calls for creating new industries and attracting foreign investment in a range of non-oil sectors, including nuclear technology, construction, artificial intelligence, education and healthcare.

Moon told Prince Mohammed that South Korea would be an “optimal” partner for Saudi Arabia's nuclear power plant project and was also willing to explore technology transfers in weapons systems so that they could eventually be manufactured in Saudi Arabia, Seoul's presidential office said.

Moon visited the United Arab Emirates on Monday, where he reportedly reached a preliminary $3.5 billion deal to sell Seoul's surface-to-air missiles to Abu Dhabi and pledged deeper cooperation with the Arab country. The South Korean leader is scheduled to visit Egypt next.

State-run Saudi media said among those who attended Moon's talks with the Saudi crown prince at Al-Yamama Palace in Riyadh were a number of ministers, including the crown prince's younger brother, Prince Khalid bin Salman, who serves as deputy defense minister.

The crown prince has largely taken over day-to-day rule of Saudi Arabia from his father, King Salman. It was unclear whether Moon would also meet the king, who has only made limited public appearances since the pandemic began.

This is the first visit to Saudi Arabia by a South Korean president since 2015. The Saudi crown prince visited South Korea in mid-2019.

Prince Mohammed faced international fallout in the immediate aftermath of the 2018 killing of Saudi writer Jamal Khashoggi by Saudi agents in the kingdom's consulate in Turkey. Though the crown prince still faces scrutiny abroad, Western and Asian billionaires, members of U.S. Congress, celebrities, world leaders and others have been wooed back to Saudi Arabia.