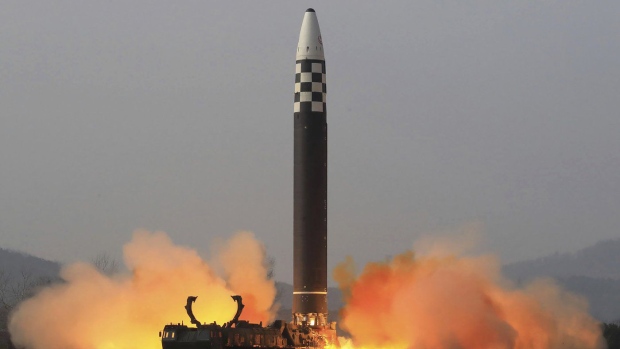 FILE - This photo distributed by the North Korean government shows what it says a test-fire of a Hwasong-17 intercontinental ballistic missile (ICBM), at an undisclosed location in North Korea on March 24, 2022. Independent journalists were not given access to cover the event depicted in this image distributed by the North Korean government. The content of this image is as provided and cannot be independently verified. Korean language watermark on image as provided by source reads: "KCNA" which is the abbreviation for Korean Central News Agency. (Korean Central News Agency/Korea News Service via AP, File)

The move was largely symbolic considering the lack of financial exchanges and business activities between the rival Koreas. But the steps may still draw an irritated response from North Korea, which last month called South Korean President Yoon Suk Yeol and his government “idiots” and a “wild dog gnawing on a bone given by the U.S.” after Seoul said it's considering placing more unilateral sanctions on Pyongyang.

The South Korean sanctions were announced shortly after the U.S. Treasury Department said it sanctioned three members of North Korea's ruling Workers' Party who provided support to the country's development of nuclear and ballistic weapons.

The eight individuals and seven organizations targeted by Seoul had already been sanctioned by Washington and were involved in a variety of North Korean efforts to evade United Nations Security Council sanctions to finance its weapons program, including ship-to-ship transfers of fuel and illicit exports of labor, the ministry said.

South Korea imposed sanctions in October on 15 North Korean individuals and 16 organizations accused of supporting the North's arms development, which were Seoul's first unilateral sanctions on Pyongyang in five years.

North Korea ramped up its weapons demonstrations to a record pace this year, test-firing dozens of missiles including ICBMs, as it exploited the distraction created by Russia's war on Ukraine to advance its weapons program and dial up pressure on Washington and Seoul.

U.S. and South Korean officials have also said there are signs that the North is preparing to conduct its first nuclear test since September 2017. That would escalate a brinkmanship experts say is aimed at forcing the United States to accept the idea of the North as a nuclear power, and negotiating concessions from a position of strength.

China and Russia vetoed a U.S.-led attempt in May to toughen Security Council sanctions on North Korea over its earlier ballistic tests, underscoring a division between the council's permanent members deepened over Russia's invasion of Ukraine. Experts say the North's next nuclear test, which would be its seventh overall, is likely be the first in which the Security Council fails to respond with new punitive measures.