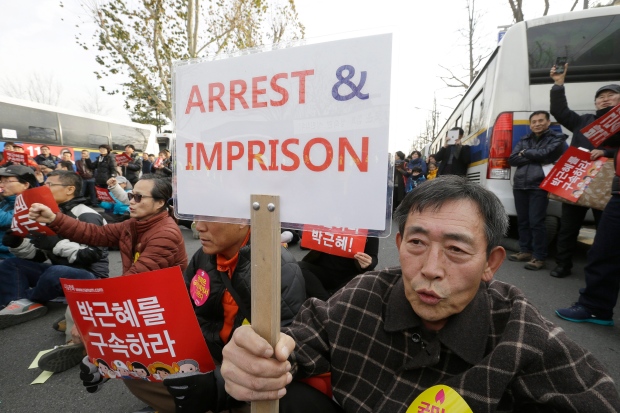 A protester shouts slogans during a rally calling for South Korean President Park Geun-hye to step down near the presidential house in Seoul, South Korea, Saturday, Dec. 3, 2016. Hundreds of thousands of South Koreans marched in capital Seoul for the sixth straight Saturday calling for the removal of scandal-plagued Park, who faces an impeachment vote in parliament next week. (AP Photo/Ahn Young-joon)

SEOUL, Korea, Republic Of -- Rallying for the sixth straight weekend in what has become perhaps South Korea's biggest protests ever, demonstrators in Seoul on Saturday got the closest yet to the president they desperately want removed.

The demonstration came hours after lawmakers formally launched an attempt to impeach President Park Geun-hye and set up a floor vote for as early as next Friday. State prosecutors accuse Park of helping a close confidante extort money and favours from large companies and manipulate state affairs.

The scandal has sparked mass protests each Saturday in downtown Seoul. In the latest demonstration, the protesters advanced to a narrow alley about 100 metres (yards) away from the presidential palace grounds, an area police didn't previously permit them to enter.

Police were expecting the turnout to be similar to the previous Saturday, when they said 270,000 turned out for the largest anti-Park rally. Protest organizers estimated that crowd at 1.5 million.

Thousands of demonstrators, led by the relatives of a 2014 ferry disaster that killed more than 300 people, mostly teenagers on a school trip, jammed the alley near the presidential office, shouting for hours for Park's arrest, not just her resignation.

Some protesters angrily threw flowers at police, who had created tight perimeters around the street, and demanded that officers get out of the way.

"We not once were allowed on this street in the past year and seven months. I have long dreamed of the day I stand here with citizens," said Jeon Myeon-seon, one of the parents of the teenagers who died in the ferry disaster, which was partially blamed on government incompetence and corruption. "We will continue to join this fight with our fellow citizens until the full truth is out on how this government defrauded its people."

Thousands also rallied near the National Assembly to pressure parties, including Park's conservative ruling party, to vote for her impeachment next week.

Opposition parties controlling South Korea's parliament had earlier planned to call for a vote this past week, but were threw off after Park made a conditional offer Tuesday to leave office, which left them squabbling over timing.

Park's overture has also caused cracks among dissenters in her conservative ruling party who had earlier backed her impeachment, an alarming development for opposition parties, which don't have enough votes to push through the impeachment motion themselves.

"I am full of anger, but also worried," said Ray Kim, an out-of-towner who participated in the Seoul protests for the second consecutive week. "It would leave a terrible historical example if millions protested for weeks against a crime-committing president but she was able to shake it off."

Opposition parties waited until after the end of this week's plenary session to register an impeachment motion at 4:10 a.m. Saturday. It means the vote will take place as early as next Friday.

The motion, which had the support of 171 opposition and independent lawmakers, accuses Park of violating the constitution and undermining democracy by allowing her longtime friend Choi Soon-sil to interfere in state affairs, and letting senior presidential aides help Choi extort from companies.

It also accuses Park of committing other crimes, such as abuse of authority, coercion and bribery, over allegations that large companies were bullied or offered rewards for giving money and favours to foundations and businesses Choi controlled.

"President Park Geun-hye, in executing her duty, has broadly and seriously violated the constitution and laws," the impeachment motion says.

A group of anti-Park lawmakers in the ruling party have called for Park to announce by Wednesday that she will step down voluntarily in April. It's uncertain whether they will back the impeachment bill if she does.

On Tuesday, Park, without providing a timeline, said she would leave office if parliament comes up with a stable power transfer plan. Opposition lawmakers criticized the overture, saying it was a stalling ploy aimed at luring back members of her party who supported impeachment.