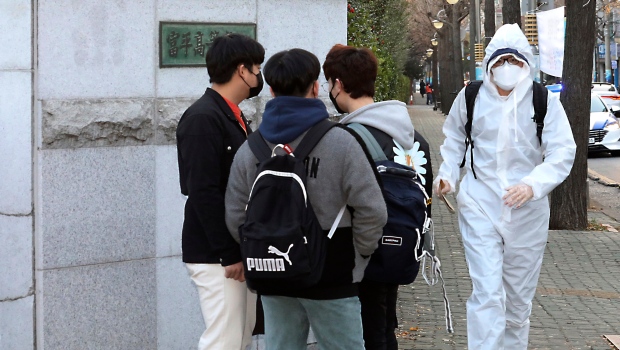 About 493,430 students were taking the one-day exam at about 1,380 sites across the nation, including hospitals and other medical facilities where the 35 virus patients and hundreds of other test-takers in self-quarantine sat separately from others, according to the Education Ministry.

The annual exam, called "suneung," or the College Scholastic Ability Test, is crucial for many students in the education-obsessed country, where job prospects, social standing and even who you marry can often depend on which university you graduate from.

Defence and land ministries said they temporarily banned military exercises and stopped air traffic to reduce noise during English-language listening parts of Thursday's exam, as they did in past years. Government offices and many private companies asked their employees to come in late, and the country's stock market delayed its opening to clear roads for test-takers.

This year's exam had been originally scheduled for November but were delayed due to the virus outbreak. Experts say on-and-off online classes have widened the gap between high achievers and low performing students due to reduced interaction with teachers, digital distractions and technical difficulties.

"If the exam had been delayed again, our kids would have felt much more psychological pressure ... I think it's fortunate the exam is taking place now," said Kim Sun-wha, mother of a test-taker. "I hope everyone would avoid making mistakes, do their best and get good results."

Mothers hugged their children and patted their backs before they entered a temporary exam site set up at a high school in Seoul. One shouted, "Don't be nervous! Do Well!" and another screamed "Cheer up!"

Students are required to have their temperature taken before entering test sites, wear masks throughout the exam and have their maintain distance from each other. They should bring their own water and lunch because they aren't allowed to use water purifiers or drinking fountains at the sites or go outside to get meals. Those with a fever will go to separate testing areas. There are a total of 1,383 sites, an increase of 198 from last year, according to the Education Ministry.

In recent days, the South Korean government has urged the public to stay home and avoid social gatherings as much as possible to provide a safe environment for those taking the exams. Park Yu-mi, an anti-virus official in Seoul, said authorities asked companies to have at least one-third of their employees work from home.

There are worries that the nationwide exam could accelerate the viral spread in South Korea.

During a virus briefing Thursday, health official Lee Sang-won said he felt "really sorry" that he has to ask students to be vigilant and avoid gatherings even after the exam is over later Thursday.

"I'd like to offer words of consolation to test-takers who have studied and come to take the exam under a particularly difficult situation," Lee said. "I want to tell you to put aside stress and enjoy yourselves fully (after the test), but it's regrettable that I can't say that under the current situation."

South Korea has relatively successfully contained previous viral outbreaks this year thanks to its internationally acclaimed rapid tracing, testing and treatment strategy, combined with the widespread public use of masks. But it's now grappling with a spike in new infections after it eased distancing rules last month. Authorities last week restored stringent distancing restrictions in the greater Seoul area and other places.