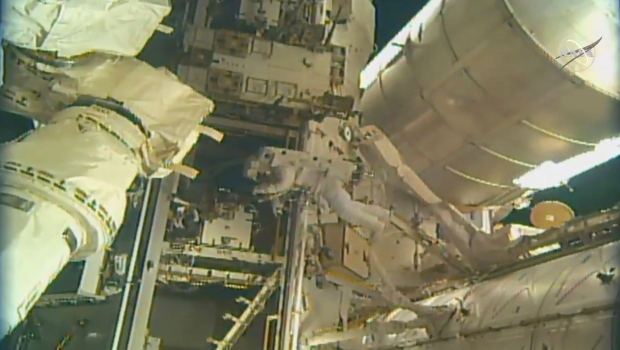 This photo provided by NASA, astronauts Andrew Morgan and Nick Hague (not seen) begin to install a docking port delivered by SpaceX last month outside the International Space Station on Wednesday, Aug. 21, 2019. (NASA via AP)

NASA astronauts Nick Hague and Andrew Morgan floated outside Wednesday to install a docking port delivered by SpaceX last month. The port will be used by SpaceX and Boeing once they start launching astronauts to the orbiting lab late this year or early next year.

This is the station's second docking port for commercial crew capsules. The first was installed three years ago. The newest port replaces one that was destroyed during a SpaceX launch accident in 2015.

It's the third spacewalk for Hague and the first for Morgan, an Army doctor who moved in a month ago.