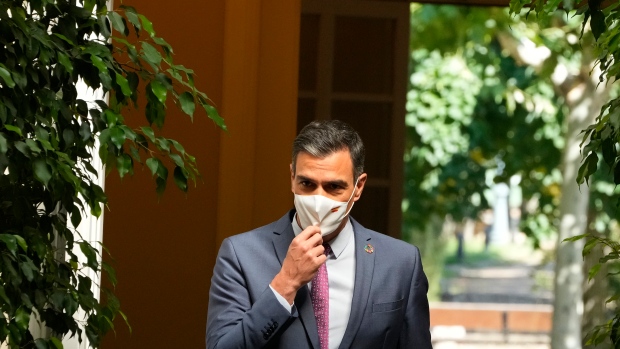 Spain's Prime Minister Pedro Sanchez arrives for a news conference at the Moncloa Palace in Madrid, Spain, Thursday, July 29, 2021. Sanchez appeared before the press to explain the current political and economic situation and the government's achievements before the summer vacation. (AP Photo/Paul White)

MADRID (AP) -- Spain's prime minister on Thursday announced that existing measures to protect the most vulnerable from the pandemic's economic fallout will be prolonged until the end of October.

Spain, one of the country's that was hardest hit at the beginning of the health emergency, has extended subsidies for the unemployed and furloughs for companies that have gone out of business to try to cushion an economic drop of 11% of its gross domestic product in 2020.

As a national lockdown extended in March last year, the government also rolled out a series of social measures, including a ban on leaving impoverished families without utilities and a moratorium on forced evictions for those who saw their income vanish.

During a televised briefing on Thursday to summarize progress during the first 1 1/2 years of his left-wing coalition, Prime Minister Pedro Sanchez said that the so-called social shield will be extended beyond the current Aug. 9 expiration date to Oct. 31.

The change will be approved by the Cabinet next week, Sanchez said.

"Our priority is to fight inequality and social exclusion," the prime minister said, adding that the emptying rural areas where population rates are diminishing are a top priority for his administration: "Our goal is that nobody, neither territories nor people, is left behind."

Spain is facing the paradox of being one of the world's leaders in the uptake of coronavirus jabs, with 55.7% of its 47 million residents already fully vaccinated, but it also has among the highest infection rates in Europe for the past two weeks.

New cases have spread mostly among people under 30, which are largely yet to receive their jabs, although the speed of contagion has plateaued in recent days. Vaccinated people can also become infected with the coronavirus in what are called "breakthrough" cases.

The country has reported 4.3 million confirmed COVID-19 cases and over 81,000 pandemic-related deaths.