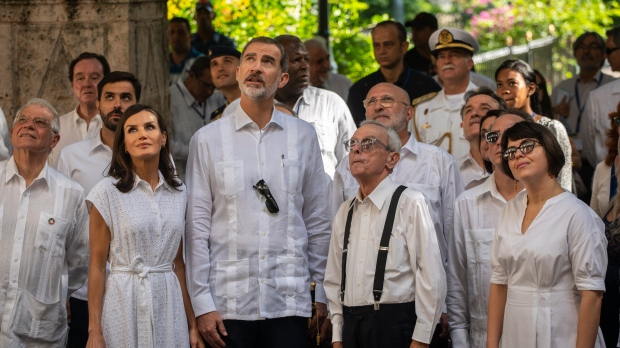 HAVANA - Spanish King Felipe VI and Cuban President Miguel Diaz-Canel met Tuesday at the start of the first modern state visit to Cuba by a member of the royal family that once ruled the Caribbean island.

The king and Queen Letizia began their official activities by offering a wreath at a monument to Jose Marti, a hero of Cuba's 19th century fight for independence from Spain.

After their meeting in Cuba's Palace of the Revolution, the king and president signed an agreement whose details were not immediately disclosed.

The trip has sparked criticism from right-wing politicians in Spain and inspired critical opinion pieces in conservative-leaning newspapers over a trip seen as a step forward for normal relations between Spain and its former colony, a single-party communist state that cracks down harshly on dissent.

The royal couple plan to meet with cultural figures and entrepreneurs but avoid interaction with members of Cuba's illegal political opposition.

Felipe's father, King Juan Carlos, never made a state visit to Cuba during his four decades on the throne following the return of democracy to Spain after the death of dictator Francisco Franco in 1975. Pressure from conservative political parties nixed any chance of a visit.

Juan Carlos did travel to Havana in 1999 for the Ibero-American Summit. He also returned to the island after he had abdicated in 2014 to attend the funeral of Fidel Castro.