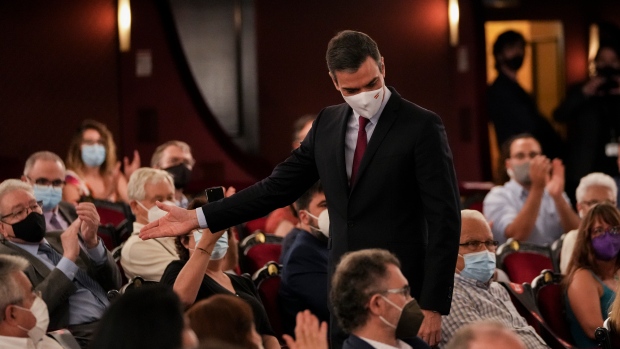 Spain's prime minister Pedro Sanchez walks out after a speech at the Gran Teatre del Liceu in Barcelona, Spain, Monday, June 21, 2021. Sanchez's said Monday that the Spanish Cabinet will approve pardons for nine separatist Catalan politicians and activists imprisoned for their roles in the 2017 push to break away from Spain. (AP Photo/Emilio Morenatti)

BARCELONA, Spain (AP) -- Prime Minister Pedro Sanchez said Monday that the Spanish Cabinet will approve pardons for nine separatist Catalan politicians and activists imprisoned for their roles in the 2017 push to break away from Spain.

Sanchez made the announcement in Barcelona during a speech set to lay the roadmap for the future of the northeastern region before a few hundred civil society representatives. He said the Cabinet would approve the pardons on Tuesday.

Twelve separatist leaders were convicted for sedition and other crimes and nine of them were handed lengthy prison terms after they pushed ahead with a banned secession referendum and declared independence a few days later based on its results. Most unionists boycotted the vote, which took place amid police violence to stop it.

No prominent pro-independence supporters attended Sanchez's speech at the Catalan regional capital's opera house. Outside the venue, an anti-establishment party and the main pro-independence civil society group were holding a protest.

"With this action, we materially get nine people out of prison, but we symbolically add millions and millions of people to coexistence," Sanchez said in his speech, titled "Reunion: a project for the future of all Spain."

The prime minister was interrupted by an activist who carried the unofficial pro-independence Catalan flag and shouted in favor of granting full amnesty to the separatists. While pardons are granted by the government as a way to spare punishment to those convicted, amnesty is seen as a recognition of no fault in the first place.

The pardons have become a divisive political issue.

Thousands opposed to the move called for Sanchez's resignation earlier this month during a protest in Madrid, supported by the three Spanish opposition parties, from the political center to the far-right.