Spare ticket for spaceflight with Jeff Bezos auctioned for $28 million 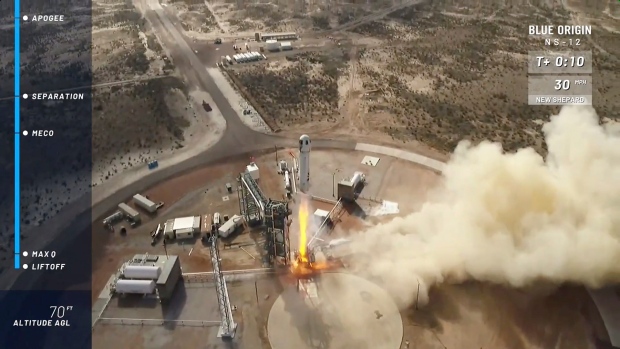 In this Dec. 11, 2019 image from video provided by Blue Origin, the New Shepard rocket takes off near Van Horn, Texas, on the sixth successful launch and landing of the same rocket. (Blue Origin via AP)

(CNN) -- What would you pay to take a jolting, 11-minute trip into suborbital space alongside Jeff Bezos? According to bidders in an auction that wrapped up Saturday, it's worth $28 million.

The company kicked off the auction last month — before it was revealed that billionaire founder and Amazon mogul Bezos, along with his brother Mark Bezos, would be on board New Shepard's inaugural crewed mission.

Blue Origin sales director Ariane Cornell said during a livestream of the event that 7,600 people from 159 countries had registered and were able to bid in the auction, which was hosted by Boston-based RR Auction, on Saturday. The name of the winning bidder was not revealed. The flight is expected to take off from Blue Origin's facilities in West Texas town of Van Horn, on July 20.

Blue Origin, the rocket venture Bezos founded in 2000, has spent the better part of a decade testing New Shepard, the 60-foot-tall rocket and capsule system. It will fmark the first time humans have flown aboard the fully autonomous New Shepard vehicle after 15 uncrewed test flights carried out by the company since 2015.

The company's ultimate goal is to sell tickets to the general public, offering brief but jarring trips to more than 62 miles above Earth for scenic views, a few minutes of weightlessness, and bragging rights. The 62-mile mark is the altitude that is internationally considered to mark the boundary of outer space, though the US government considers it to be more around 50 miles. Throughout history, people have been considered astronauts — and been awarded metals, pins or "wings" — for traveling above either mark.

The proceeds from the auction that wrapped up Saturday will be donated to Blue Origin's Club for the Future, which aims to promote science, technology, engineering, and math education among young students. But it was also a litmus test for how much wealthy consumers might be willing to pay for a brief flight into the upper atmosphere.

The $28 million price point the ticket sold for is far more than what Blue Origin's direct competitor, Virgin Galactic, has sold its tickets for. Though Galactic has yet to fly paying customers, it has already sold roughly 600 tickets for between $200,000 and $250,000 each.

But it's also far less than what it likely costs to go on a more immersive spaceflight, such as the orbital trips Elon Musk's SpaceX is offering that will allow people to spend days orbiting the Earth, or even stay aboard the International Space Station. Financial details of those planned trips have not been disclosed, but one government report said a SpaceX seat would cost as much as $55 million — not including fees for use of the space station.

The flight profile of a Blue Origin New Shepard rocket is far different from that of an orbital SpaceX rocket.

New Shepard's suborbital fights hit about about three times the speed of sound — roughly 2,300 miles per hour — and fly directly upward until the rocket expends most of its fuel. The crew capsule will then separate from the rocket at the top of the trajectory and briefly continue upward before the capsule almost hovers at the top of its flight path, giving the passengers a few minutes of weightlessness. It works sort of like an extended version of the weightlessness you experience when you reach the peak of a roller coaster hill, just before gravity brings your cart — or, in Bezos' case, your space capsule -- screaming back down toward the ground.

The New Shepard capsule then deploys a large plume of parachutes to slow its descent to less than 20 miles per hour before it hits the ground.