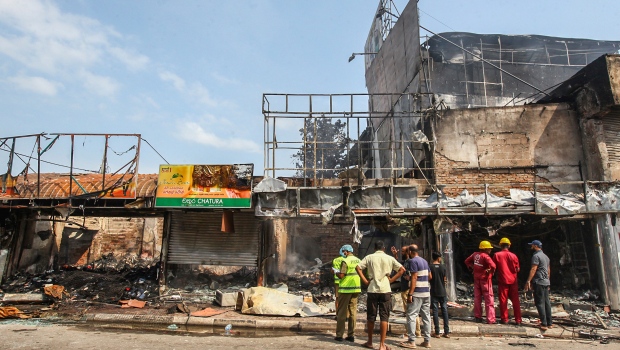 Sri Lankans inspect vandalized shops owned by Muslims in Minuwangoda, a suburb of Colombo, Sri Lanka, Tuesday, May 14, 2019. Mob attacks on Muslim communities in Sri Lanka's northwest have left one person dead and dozens of shops and mosques destroyed, a government minister said Tuesday, as communal violence worsened in the wake of Easter bombings that killed more than 250 people. (AP Photo/Chamila Karunarathne)

COLOMBO, Sri Lanka (AP) -- Mob attacks on Muslim communities in Sri Lanka's northwest have left one person dead and dozens of shops and mosques destroyed, a government minister said Tuesday, as communal violence worsened in the wake of Easter bombings that killed more than 250 people.

A Muslim man was hacked to death in Monday's violence in which members of the country's largely Buddhist majority ethnic Sinhalese attacked Muslim-owned shops and homes in several towns, said Rauff Hakeem, a Cabinet minister and leader of the Sri Lanka Muslim Congress.

Tensions have been running high in the Buddhist-majority Indian Ocean island nation since the April 21 attacks by seven suicide bombers who struck two Catholic and one Protestant church and three luxury hotels. The Islamic State group claimed responsibility for the attacks, which were carried out by a local radicalized Muslim group.

Sri Lanka has a dark history of communal tensions. For more than a quarter century it was embroiled in civil war as Tamil Tiger rebels fought to create an independent state for ethnic minority Tamils. When the conflict ended 10 years ago, the U.N.'s conservative estimates said about 100,000 people had been killed.

Two United Nations advisers warned that the latest attacks against Muslims could escalate further if not stopped immediately.

“The country is trying to move forward from a traumatic period of inter-ethnic armed conflict, but these attacks are pushing Sri Lanka backwards. If not adequately dealt with, the recent violence has the potential to escalate even further,” the advisers said in a statement.

Cardinal Malcolm Ranjith, the archbishop of Colombo, appealed to the public to maintain the peace and patience they showed in the first days after the attacks. He said that he found no religious nuances in the violence but that local level politicians have been found in the mobs.

“I ask the political leaders to keep their followers under control. It is no heroism in attacking Muslims and damaging their property - true heroism is to control and overcome oneself,” Ranjith said.