Standoff drags on as slain bus driver laid to rest 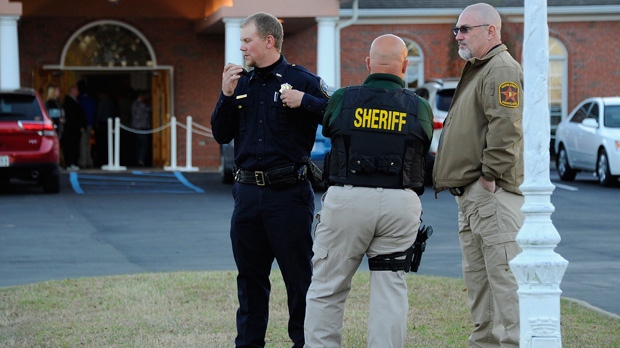 Law enforcement personnel wait outside the funeral home as people pay their respects to Charles Albert "Chuck" Poland, the 66 year old bus driver who gave his life to save the children on his bus, Saturday, Feb. 2, 2013 in Slocumb, Ala. As the police standoff with an Alabama man accused of holding a 5-year-old boy hostage continued Saturday, a nearby community prepared to bury, Poland, the beloved bus driver who was shot to death trying to protect children on his bus when the episode began days earlier (AP Photo/AL.com, Joe Songer)

MIDLAND CITY, Ala. -- The Alabama bus driver slain at the beginning of a multi-day hostage drama was known for his acts of kindness, from fixing someone's tractor to tilling the garden of a neighbour who had a heart attack.

Charles Albert Poland Jr. was mourned by hundreds who gathered at a funeral home not far from the underground bunker where police say an Alabama man was still holding a 5-year-old boy early Sunday. Friends remembered Poland as a humble hero who gave his life to protect the children on the bus -- and someone who went out of his way to help neighbours.

"You don't owe me anything," Poland, of Newton, once told a recipient of his good deed. "You're my neighbour."

The 66-year-old Poland was driving a school bus carrying 21 children last Tuesday when an armed man boarded the bus and demanded two boys between 6 and 8 years old. Poland tried to block his way, so the gunman shot him several times and abducted a 5-year-old boy -- who police say remains in an underground bunker with the suspect, identified as 65-year-old Jim Lee Dykes.

William Lisenby, a school bus driver who also taught Sunday School with Poland, was flanked by other area bus drivers as he arrived at Saturday night's viewing. Lisenby spoke in Biblical terms when referring to Poland, whose funeral is Sunday afternoon.

"If you'll notice the similarities there, of what Chuck did was the same thing that Jesus Christ did. These children, even though they were not Chuck's, he laid down his life to defend those children. My hat's off to him for that," he said.

Dykes is a Vietnam-era veteran described by some neighbours as a menacing figure with anti-government views. Neighbors said Dykes built the bunker on his rural property, and police have been communicating with Dykes through a ventilation pipe into the bunker. On Sunday morning, an unmanned drone was seen flying above Dykes' property.

Dale County Sheriff Wally Olson told reporters Saturday that Dykes has told them he has blankets and an electric heater in the bunker. Authorities have been conferring in a nearby church.

"I want to thank him for taking care of our boy," Olson said. "That's very important."

The shooting and abduction took place in Midland City, a small town near Dothan, Ala., in the state's southeastern corner.

Newton is about three miles away, a small hamlet with fewer than 2,000 residents. It sits amid cotton farms and rolling hills sprinkled with red earth; most of the residents commute to Dothan or to a nearby Army post. And many knew Poland.

"He's probably the nicest guy you'll ever meet," said Lonnie Daniels, the 69-year-old owner of the NAPA Auto Parts store, one of three establishments in town that was open Saturday.

Daniels said Poland had been married to his wife for 43 years. Poland was from Idaho, but his wife was from Newton. The couple lived there for decades in a small mobile home, and Poland enjoyed gardening and clearing brush from his property.

"I knew that he was always there if I needed," said Daniels, adding that Poland was an excellent mechanic with an array of tools that he lent to people in town.

Skipper said Poland and his wife would often sit on their porch, drinking coffee, praying and reading the Bible.

"They loved to be together," Skipper said.

On Saturday morning, Poland's wife wasn't home. A rack of worn trucker's caps sat on hooks on the porch, and two freshly baked pies were laid atop a cooler.

The victim's son, Aaron Poland, told NBC News that he wasn't surprised by his father's final act, trying to protect a bus full of kids.

"He considered them his children," Poland said, choking back tears. "And I know that's the reason why my dad took those shots, for his children, just like he would do for me and my sister."

As Newton grieves, residents are praying for the safe return of the boy being held hostage.

"The community is real concerned," said Fred McNab, mayor of Pinckard, Ala. "You can tell by the food that's been carried over there to the church. It's just devastating. We want it to come to a resolution. We want to save that little child."

Police have used the pipe for communication and to deliver the boy medication for his emotional disorders. State Rep. Steve Clouse, who visited the boy's mother, said the boy has Asperger's syndrome -- a mild form of autism -- and attention deficit hyperactivity disorder, or ADHD.

But police have not revealed how often they are in touch or what the conversations have been about.

Local officials who have spoken to police or the boy's family have described a small room with food, electricity and a TV.

Sheriff Olson would not say Saturday whether Dykes has made any demands. Olson added that he is limited in the details he can release.

Dykes had been scheduled to appear in court Wednesday to answer charges he shot at his neighbours in a dispute last month over a speed bump.