Statelessness a hurdle for some rescued Thai boys 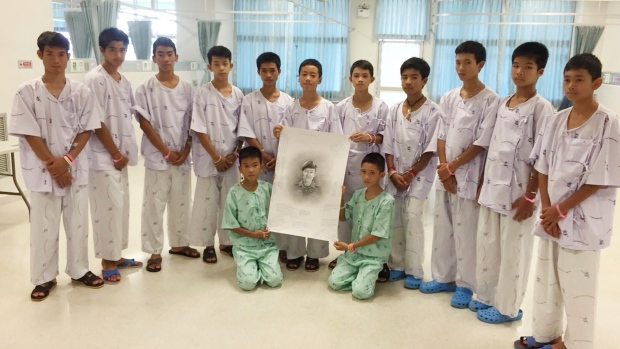 MAE SAI, Thailand -- The 12 boys and coach of the Wild Boars soccer team who were rescued from a cave in Thailand last week share a characteristic with many of the professional European clubs its youthful members idolize: They are a multiethnic, cross-border crew.

But while the stars of the major European leagues, no matter what their origins, can stake a claim to fame and fortune, some of the Wild Boars cannot even count on a permanent home.

Three of the players -- Mongkol "Mark" Boonpium, 13, Adul Samon, 14, and Pornchai "Tee" Khamluang, 16 -- and 25-year-old assistant coach Ekapol "Ake" Chanthawong are stateless, their lack of citizenship not only restricting their upward mobility, but even their right to travel outside of Chiang Rai, the northern province where they live.

It is no anomaly that four of the 13 trapped in the cave are not Thai citizens, the Wild Boars' head coach, Nopparat Kanthawong, said in an interview. Of the 70-80 boys in the team's four age brackets, around 20 are stateless.

The cave ordeal should help put a spotlight on the issue of statelessness in Thailand. Nopparat hopes it will advance his players' sporting ambitions.

"I would ask media to highlight this situation they are facing," he said. "All of the kids who join the team, they all wish that they would be professional soccer players. But they would not be able to do so if they don't have nationalities."

He explained that the most glaring problem is that if his stateless players want to travel outside the province, they must get a pass with official permission, whether for personal affairs or a soccer competition. Getting a passport to take up various European clubs' invitations to watch them play is an even bigger task.

Northern Thailand, whose porous borders have long been a boon to migrants, refugees and smugglers, is a melting pot of ethnic groups, including the Akha, Lahu, Lisu, Yao, Shan, Hmong and Karen. In neighbouring Myanmar, the frontier regions are dominated by ethnic minority groups, but underdevelopment and conflict make opportunities scarce. Some people flee for their lives to Thailand; others just seek a better life.

It is not necessarily an uncomfortable transition. There are settled communities of minority groups on both sides of the border, and Thailand generally takes a laissez-faire attitude.

Adul's parents sent him from Myanmar to get a decent education in Thailand, which is impossible in his home state, Wa, which is plagued by armed conflict and instability. He is a star pupil, and a bit of a celebrity for being the sole English speaker among the 13 trapped in the cave. He also is reported to speak Thai, Burmese and Chinese.

"We found that in many cases, those who migrated here and those who fled life-threatening situations to come here aren't able to return to their origin countries," Angkhana Neelapaijit of Thailand's National Human Rights Commission said Monday. "If they have clear intentions to establish residency here, even if they were born in neighbouring countries but have children and residency here, at least the rights of children from these families should be protected."

She said those seeking to gain Thai citizenship must enter a verification process to prove that they either have Thai parents or were born in Thailand. The process can be difficult and complicated, she added, as officials also have to be vigilant over the many fraudulent and corrupt methods that are used to gain citizenship.

Activists say the naturalization process is too difficult, especially for less educated rural migrants who were never documented in their country of origin and who are outsiders as far as local Thai authorities are concerned. Navigating the paperwork is arduous at best, and corruption is a hazard.

In late 2016, Thailand's military government agreed to a plan under which an estimated 80,000 stateless people would be eligible for citizenship.

Coach Nopparat said he is particularly keen to help the stateless boys who were rescued from the cave.

"Those three play well, they are determined when they practice," he said. "Now I have heard of the good news that they will be considered to have Thai nationality. Those kids are stateless, but when they leave (the hospital) and recover, I could take them through the process of documents and through the official government process."