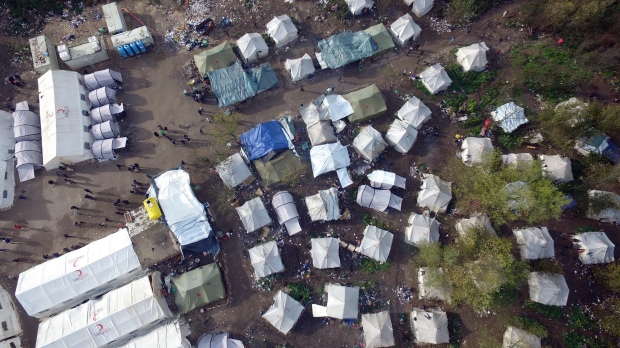 This aerial photo shows the Vucjak refugee camp outside Bihac, northwestern Bosnia, Friday, Nov. 15, 2019. The European Union’s top migration official has joined the calls for the closure of a migrant camp in Bosnia set up on a former landfill. The EU has given Bosnia over 36 million euros ($40 million) in aid. But conditions at Vucjak are so bad that the EU’s migration commissioner says that “no EU financial support can, or will be, provided for it.” (AP Photo/Eldar Emric)

BIHAC, Bosnia - A storm in Bosnia has swept through a bleak make-shift camp for migrants who are trying to reach Western Europe, blowing many tents away.

Migrants staying in the Vucjak camp near Bosnia's border with Croatia were appealing for help on Saturday after spending a sleepless night looking for shelter.

“Please help me, I am human, not an animal, give me roof!” pleaded Kamran Han from Pakistan. “You see this place not for humans ... this is a forest, this is an animal place, not for humans.”

Numerous international organizations have repeatedly called for the closure of the Vucjak camp, which is located on a former landfill and is near a mine field left over from Bosnia's 1992-95 war.

Hundreds of migrants have been staying there with almost no facilities since the authorities in northwestern Bosnia set up the camp earlier this year.

The Balkan country has been overwhelmed by the arrival of thousands of people fleeing violence and poverty.

The Doctors Without Borders humanitarian group warned this week that people could die in Bosnia because of the poor conditions.

In the Vucjak camp, garbage floated in the pools of water amid persisting rain. Some migrants were trying to fix their tents, while others lit fires to warm up and stay dry.

“We don't have anything to make it (tent) stand,” Kasif Pervez, also from Pakistan, said, while showing his demolished tent. He said migrants got no help to fix the camp from the authorities or aid groups.