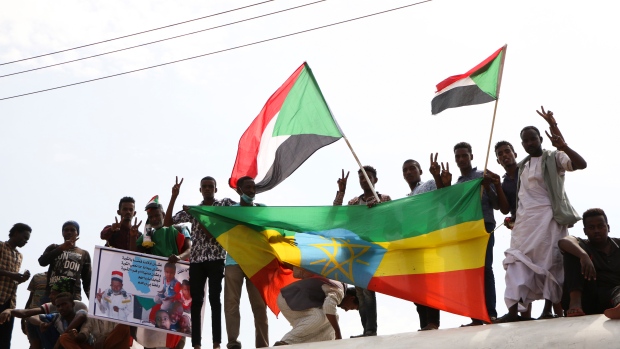 CAIRO -- Sudan's ruling military council said on Monday the country's pro-democracy movement has asked for a delay on the announcement of a joint ruling body because of last-minute, internal disputes over the opposition appointees.

The new, 11-member body -- called the sovereign council -- is to rule Sudan for a little over three years until elections can be held.

The body was envisaged under a power-sharing deal between the military and the protesters that sought to resolve a weeks-long standoff.

The military and protest leaders signed the final power-sharing deal on Saturday, following pressure from the United States and its Arab allies, amid growing concerns the political crisis could ignite another civil war in Sudan.

The military moved in, ousted al-Bashir in April and took over the country. But the protesters stayed on the streets fearing a military dictatorship and demanding a speedy transition to civilian rule. After a deadly crackdown, several rounds of negotiations and mediation by the African Union, Ethiopia and the West, the demonstrators and the generals agreed to a power-sharing deal.

The makeup of the sovereign council was to be announced Sunday, to be followed by the disbanding the ruling military council that had run the country since April.

But the military council's spokesman Shams el-Din Kabashi said the pro-democracy movement withdrew its appointees to the council, saying it would hold more consultations among its factions.

That comes after internal disputes within the Sudanese Professionals Association, one of the opposition factions, over the nomination of one its leaders, Taha Othman, to the sovereign council -- despite SPA's decision to bow out of it.

Othman, who has been a protest negotiator, himself said earlier Monday he was withdrawing his nomination because of "the confusion and divisions" within the SPA.

The sovereign council would include five military members and five civilians. An eleventh, independent member was also agreed on, though his identity has not been revealed, Kabashi said.

Gen. Abdel-Fattah Burhan, who chaired the military council, would lead the sovereign council for the first 21 months while a civilian leader would follow for the next 18.

Protest leaders have nominated a well-known economist, Abdalla Hamdok, to serve as prime minister of the interim Cabinet during the transition.

He was the deputy executive secretary of the United Nations Economic Commission for Africa since November 2011, but has yet to be confirmed by the sovereign council.