Sudanese protesters call for strike amid divisions with army 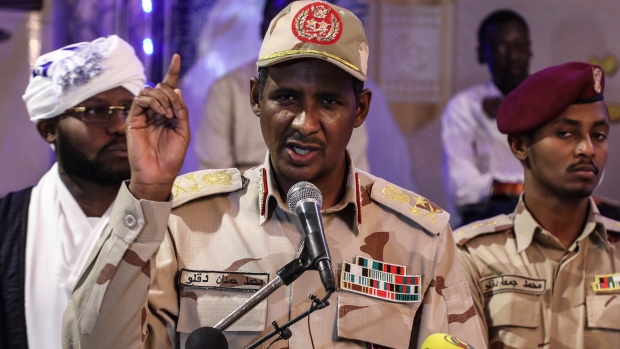 In this Saturday, May 18, 2019 photo, Gen. Mohammed Hamdan Dagalo, better known as Hemedti, the deputy head of the military council that assumed power in Sudan after the overthrow of President Omar al-Bashir, speaks to journalists in Khartoum, Sudan. (AP Photo)

KHARTOUM, Sudan -- Sudan's protest leaders on Saturday issued a call for a two-day general strike next week in a bid to press the ruling military council to transfer power to a civilian-led authority.

The Sudanese Professionals' Association, which spearheaded the protests that led the army to oust President Omar al-Bashir last month, set the nationwide strike for Tuesday and Wednesday. The SPA called on people to go to work but abstain from any activity, then head to various marches and sit-ins across the country.

The protests will culminate in mass rallies on Thursday, the SPA said. It has threatened civil disobedience if the military council doesn't hand over power to civilians.

Talks between protesters and the army reached an impasse Tuesday, after both sides had agreed to a three-year transitional period but were split over the makeup and leader of the sovereign council that would run the country in the transition. Protesters say they want a civilian leader and "limited military representation," but say the ruling generals have refused to relinquish power over the council.

In the ongoing sit-in outside the military complex in Khartoum on Saturday, protesters denounced the generals' clinging to power.

"The legitimacy is belonging to the people, the military council doesn't have legitimacy, they took the power in order to protect the Sudanese people, and the Sudanese will demand forever for a full civilian-led authority," said protester Mohammed Shareef.

The Forces for the Declaration of Freedom and Change, which represents the protesters in the negotiations with the military council, said Friday that they have been forced to stage the general strike. The group said there was no other way "to rectify the course of the revolution and achieve its goals."

The military and protest leaders have held several rounds of talks since the army overthrew al-Bashir on April 11, ending his 30-year reign.

Also on Saturday, Egyptian President Abdel-Fattah el-Sissi received Gen. Abdel-Fattah Burhan, head of Sudan's military council, in Cairo, said Bassam Radi, spokesman for Egypt's presidency in a brief statement. Since the overthrow of al-Bashir, Egypt has voiced its support for the military council and pressed the African Union not to suspend Sudan's activities in the regional block.