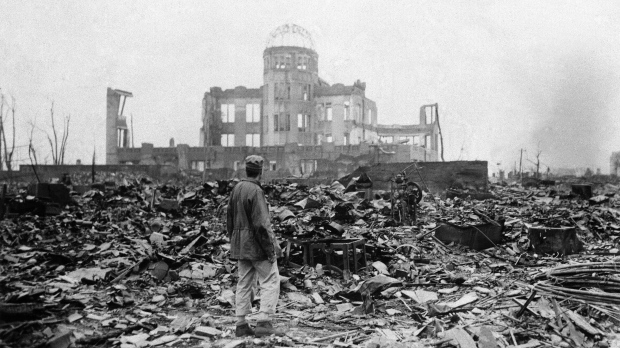 FILE - In this Sept. 8, 1945, file photo, an allied correspondent stands in a sea of rubble before the shell of a building that once was a movie theater in Hiroshima, western Japan, a month after the first atomic bomb ever used in warfare was dropped by the U.S. to hasten Japan's surrender. (AP Photo/Stanley Troutman, Pool, File)

HIROSHIMA, Japan - The city of Hiroshima in western Japan is marking the 75th anniversary of the U.S. atomic bombing.

Three days later, the United States dropped a second atomic bomb on Nagasaki. Japan surrendered on Aug. 15, ending World War II and the Japanese aggression in Asia that lasted nearly half a century.

Hiroshima was a major Japanese military hub with factories, military bases and ammunition facilities before the bombing.

An estimated 140,000 people, including those with radiation-related injuries and illnesses, died from Aug. 6 through Dec. 31, 1945.

That was 40% of Hiroshima's population at the time. Hiroshima today has 1.2 million residents.