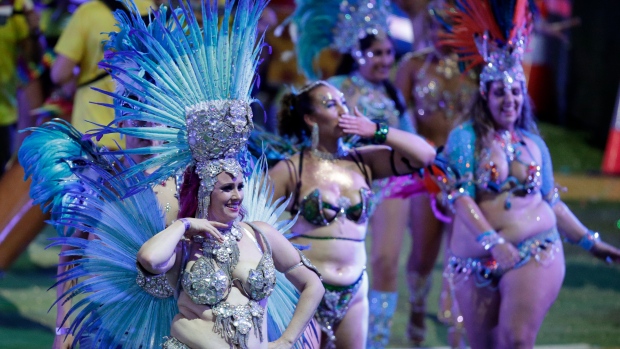 Participants march in the Gay and Lesbian Mardi Gras parade at the Sydney Cricket Ground in Sydney, Saturday, March 6, 2021. The annual event has been forced into a sport stadium due to COVID-19 restrictions. (AP Photo/Rick Rycroft)

SYDNEY, Australia - Sydney's annual iconic Gay and Lesbian Mardi Gras went ahead on Saturday, only in a different format due to coronavirus restrictions.

It was being held at the Sydney Cricket Ground, where people can socially distance in their seats rather than on the traditional route down Oxford Street.

Up to 23,000 spectators will be allowed in the stands while the performers will be on the pitch.

Organizers say this year's parade will move away from the traditional large floats and instead focus on the outlandish pageantry of costumes, puppetry and props. Face masks will be mandatory for participants and there will be temperature checks and screening at entry points.

Meanwhile, LGBTQI rights protesters have been given the green light to march down Oxford Street in a separate event before the parade. Health officials in New South Wales state agreed to make an exception to the 500-person limit on public gatherings after organizers agreed to enhanced contact-tracing processes.

The marchers are protesting social issues including transphobia, the mandatory detention of asylum-seekers and the criminalization of sex work.