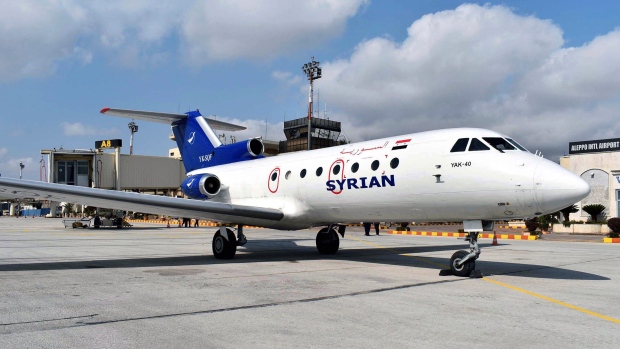 In this photo released Tuesday, Feb. 18, 2020 by the Syrian official news agency SANA, a YAK-40 plane is parked on the Aleppo Airport apron, in Aleppo province, Syria. A Syrian commercial flight landed at Aleppo Airport on Wednesday from Damascus, marking the resumption of internal flights between Syria's two largest cities for the first time since 2012. (SANA via AP)

ALEPPO, Syria - A Syrian passenger jet landed in Aleppo on Wednesday from Damascus, marking the resumption of domestic flights between Syria's two largest cities for the first time since 2012, while the government's onslaught continued nearby with airstrikes reported in several rebel-held towns and villages.

The flight carrying Syrian officials and journalists was an important symbol that President Bashar Assad's government has consolidated control over the northwestern province of Aleppo and seized the last segments of the strategic M5 highway linking Aleppo to Damascus. The motorway is being repaired and is scheduled to reopen in coming days for the first time in eight years.

Backed by heavy Russian airstrikes, government forces have for weeks been conducting a crushing military campaign to recapture the Aleppo countryside and parts of neighbouring Idlib province in northwestern Syria, the last rebel-held areas in the country. It has also strained co-operation between Turkey and Russia, whose governments support opposing sides in the war.

The widening multiple front Syrian offensive has sent hundreds of thousands of Syrian civilians fleeing toward the border with Turkey in the biggest single displacement of the nine-year war. Escaping the bombs, many of them left with their belongings piled up on vehicles and are now staying in tents, in open fields and under trees in freezing temperatures near the Turkish border. The U.N. has put the number of civilians displaced since Dec. 1 at more than 900,000 - most of them women and children.

Satellite images showed the staggering scale of the displacement, concentrated within a small space in Idlib province near Syria's border with Turkey.

The images from Colorado-based Maxar Technologies show an enormous number of refugee tents and shelters near Kafaldin and Deir Hassan. A comparison with images of the area from a year ago shows the rapid expansion of informal camps, as hundreds of thousands of people scrambled to escape the onslaught. The images also show tents near the edge of a nearby quarry.

The military campaign has killed hundreds and disrupted the distribution of aid, with the bitter winter compounding the suffering.

The commercial Syrian Air flight landed in Aleppo after a 40-minute flight from Damascus and was welcomed by a military band on the tarmac. Syrian warplanes flew low overhead in a show of force and celebration. Syrian Tourism Minister Rami Radwan Martini and Transport Minister Ali Hammoud had earlier opened the airport for business.

Hammoud called the opening of the airport is a “great joy” for Syrians and a “dream” for the ministry. It has been closed since 2012 due to fighting after Aleppo fell into rebel hands.

Backed by Russia and Iran, the Syrian army drove the rebels out of Aleppo in December 2016, after a crushing siege and bombardment campaign. The airport opened briefly in 2017 to much fanfare but closed again due to security concerns.

Airstrikes and shelling were reported Wednesday on several rebel-held areas, mostly near the towns of Daret Azzeh and Atareb. The Britain-based Syrian Observatory for Human Rights, an opposition war monitoring group, reported more than 120 airstrikes on Tuesday alone.

The Syrian Civil Defence, an activist group, reported that four civilians were killed and 18 were wounded in Tuesday's bombardment on several parts of Idlib.

The government offensive has strained ties between Ankara and Moscow, which support opposing sides in the war, although they have closely co-ordinating their moves in recent years in Idlib province. A truce reached between the two countries collapsed in late 2019, leading to the current Russian-backed offensive.

Turkey arms and trains the Syrian opposition and has sent thousands of troops and military reinforcements into Idlib in recent weeks to try to stem the government advance. That has led to rare clashes between Turkish and Syrian troops with deaths on both sides.

Erdogan said that time was running out for Syrian government forces to retreat from Idlib.

“We are delivering our final warnings. We have not reached the desired results as yet,” Erdogan said, addressing legislators from his ruling party in Parliament. “The operation in Idlib is a matter of time. We could enter (Idlib) suddenly one night.”

Erdogan spoke a day after a top Turkish official said talks between Russian and Turkish delegation meant to reduce tensions in Idlib did not yield a “satisfactory result” for Ankara. The official said however, that the sides agreed to continue talks.

Russian officials shot back, holding Turkey responsible for the collapse of the cease-fire deal that was reached during talks in Sochi, Russia, saying Ankara had not held up its end of the deal to rein in militants, who continued attacking Syrian and Russian targets.

“We were satisfied with the agreements reached a year ago in Sochi,” Kremlin spokesman Dmitry Peskov said.

“We absolutely stopped being satisfied when militias and terrorists in Idlib started their attacks on the Syrian military and Russian military objects. That's where our satisfaction ended.”

He said the Kremlin intends to use its “working contacts” with Turkey to try to prevent further escalation.

Wissam Hazim, southern hub staff safety officer for the charity, and Adel Al-Halabi, a driver, were killed when their vehicle was attacked by an unidentified armed group, Oxfam said. An Oxfam volunteer also was injured, the group said in a statement.

“We are devastated by the loss of two valued colleagues who were killed as they worked to deliver aid to civilians caught in the Syrian conflict,” said Moutaz Adham, Oxfam Syria country director.

The province of Daraa is under control of Syrian government forces, although there have been reports of violence by rebels.

This story has been corrected to show that Syria's tourism minister is Radwan Martini, not Bishr al-Yazigi.