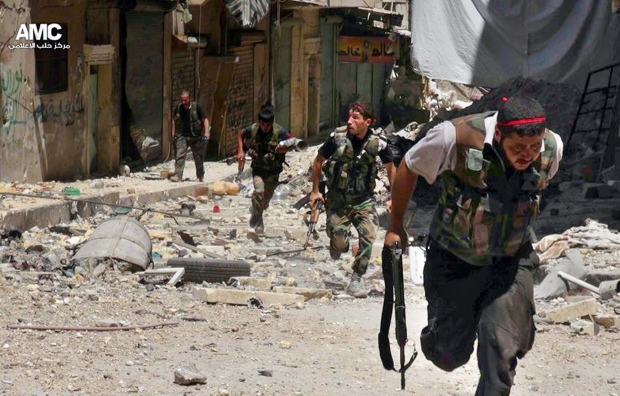 This Tuesday, July 9, 2013 citizen journalism image provided by Aleppo Media Center AMC, which has been authenticated based on its contents and other AP reporting, shows Syrian rebels running during heavy clashes with Syrian soldiers loyal to Syrian President Bashar Assad, in the Salah al-Din neighborhood of Aleppo, Syria. (AP Photo/Aleppo Media Center AMC)

BEIRUT -- With rebels fleeing into neighbouring Lebanon, Syrian government troops and Hezbollah fighters captured a strategic town near the frontier Sunday, ousting opposition fighters from their last stronghold in the vital border area.

Yabroud was a major smuggling hub for the rebels trying to overthrow President Bashar Assad. The town's fall is the latest in a string of strategic gains by Assad's forces that have consolidated authority in the past months in Syria's major cities, including the capital, Damascus.

Militants from Lebanon's Shiite group Hezbollah have been instrumental to Assad's success on the battlefield, and support from the Iranian-backed fighters appears to have tipped the balance into the government's favour in Yabroud. However, the fact that opposition fighters fled into Lebanon, where Hezbollah is a major force, suggests the conflict could bleed further into Syria's neighbour. The civil war already has ignited polarizing sectarian tensions between Lebanon's Sunnis and Shiites.

"It's a good day for Assad," said Fawaz A. Gerges, director of the Middle East Center at the London School of Economics. "He has not only survived the past three years, but his army is intact and on a rebound, with his allies Hezbollah firmly behind him."

However, Gerges warned the fall of Yabroud will reverberate in neighbouring Lebanon, "pouring gasoline on sectarian divisions and likely bring more violence" into the country.

Outgunned by Assad's army and Hezbollah, rebels abandoned their positions on the hills surrounding Yabroud overnight Sunday, collapsing the fighter ranks inside the town and allowing government forces to move in from the east shortly after dawn, a spokesman for the rebel coalition and the Syrian army said.

Yabroud was an important supply line for rebels into Lebanon. The town overlooks an important cross-country highway from Damascus to the central city of Homs.

"There's no doubt Yabroud had big strategic importance," said Capt. Islam Alloush, a spokesman of the Islamic Front, a rebel coalition who had fought in Yabroud but were now streaming into Lebanon. The biggest immediate loss, Alloush said, would be that rebels now had no way of supplying fighters outside of Damascus, where Syrian forces have surrounded a series of opposition-held areas, denying them food, power and clean water.

"We are moving from one victory to another," al-Freij said in comments carried by state news agency SANA. He said the army troops are now "chasing terrorists and gangs, and soon, all their hideouts will be destroyed." Syrian officials routinely refer to rebels as terrorists.

The fall of Yabroud immediately emboldened government forces to attack nearby rebel-held towns, pressing forward in what has been nearly a yearlong advance against opposition fighters.

Government warplanes chased the fleeing rebels into Lebanon, state media said, firing two rockets in the outskirts of the border town of Arsal, a logistical base for the Syrian rebels. The surrounding fields and hills have serve as shelter for tens of thousands of refugees.

The bombing killed at least six people, including two children, in the nearby village of Muarat, they said.

The sectarian tones of Syria's war have triggered violence in Lebanon, which shares a similar patchwork of minorities.

The chaotic mix of rebels fighting Assad forces are overwhelmingly Sunni, while Syria's minorities, including Christians, Shiites and Alawites, largely have sided with the government or remained neutral. Assad himself is part of the Alawite sect, an offshoot of Shiite Islam.

Near the Syrian border, however, an extremist Sunni group in Syria, the Islamic State in Iraq and the Levant, claimed responsibility for firing rockets at a Shiite-dominated town near Arsal, local media reported.

One man was killed in the town of Nabi Sheet, while other rockets landed in the nearby town of Labweh on Saturday, the NNA said.

The Syrian war also has exacerbated tensions in the northern Lebanese city of Tripoli, which date back to Lebanon's own 1975-1990 civil war. Two impoverished neighbourhoods there belonging to rival sects have had dozens of clashes. The fighting has left 12 people dead in Tripoli since Thursday, the NNA said. The agency said the latest fatality from the fighting was a soldier.

Late Sunday, car bomb killed at least two people in the town of Nabi Othman, about 30 kilometres north of Baalbek, Lebanese security officials said, speaking on condition of anonymity in line with regulations. They said the explosion caused panic and massive destruction in the Hezbollah stronghold, which has a sizable Christian population in addition to Shiites.

Hezbollah-owned Al Manar TV said a suicide bomber detonated the car as he was chased on the road leading into town.