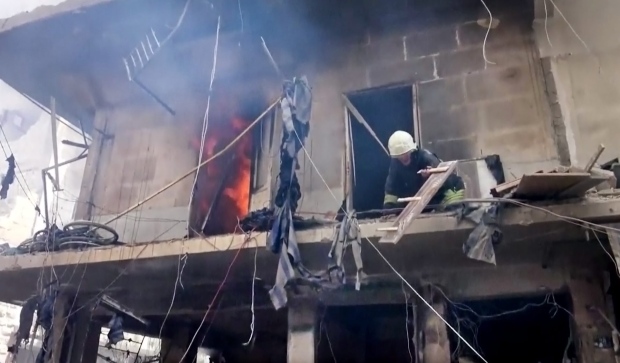 In this image made from video and posted online from Validated UGC, a firefighter tries to extinguish a building caught on fire after airstrikes hit Aleppo, Syria, Thursday, April 28, 2016. (Validated UGC via AP video)

DAMASCUS, Syria - Insurgents shelled a government-held area in the contested city of Aleppo, hitting a mosque and killing at least 15 people as they left Friday prayers, while government airstrikes struck rebel-held parts of Syria's largest city - even as the army unilaterally declared a brief truce in other parts of the country.

The violence in Aleppo has killed more than 200 civilians over the past week and is likely to continue unchecked, as the government's cease-fire does not include the city.

“We want the army to finish them,” an Aleppo resident told state TV outside a hospital where some of the dead and wounded were taken.

The attack followed an early morning lull in airstrikes on rebel-held parts of Aleppo, following days of deadly violence that killed scores.

Yet by late morning air raids resumed on the city, killing at least 10 people, according to activists from the Britain-based Syrian Observatory for Human Rights and the Local Coordination Committees (LCC).

The resumption of air raids prompted religious leaders to suspend the collective Friday prayers in mosques in rebel-held areas.

The Religious Council of Aleppo, a body that runs religious affairs in opposition-held parts of the province, said in a statement online that it was calling on mosque leaders to call-off Friday prayers for the first time. “The heart of the believers is aching ... but preserving lives is an important religious duty,” it said.

The Observatory reported that 11 people were killed in the strikes on opposition areas, while the LCC and the volunteer first-responders team, the Syrian Civil Defence, said at least 10 people died and dozens were wounded.

The LCC and the Observatory also reported shelling near a clinic in the rebel-held neighbourhood of Marjeh. The Syrian Civil Defence said there were no casualties in the shelling because the clinic was empty on Friday.

The humanitarian situation has deteriorated further in opposition-held neighbourhoods, which are almost encircled. The sole road leading in and out of rebel-held areas from northwest Aleppo is regularly targeted by sniper fire and shelling.

The carnage in Aleppo - a city contested since the summer of 2012, when opposition fighters took over several districts - was particularly bad on Wednesday and Thursday, when airstrikes and artillery killed more than 80 people, including dozens at a hospital in a rebel-held neighbourhood.

On Friday, Doctors Without Borders, which had supported the hospital alongside other international organizations, said the death toll in Thursday's bombing had risen to 50, including six medical staff and patients.

The medical charity, also known by its French acronym MSF, said it was “desperately” worried about the estimated 250,000 people living in rebel-held areas of Aleppo, who are in danger of being completely cut off and left without medical care.

“The city, consistently at the frontlines of this brutal war, is now in danger of coming under a full offensive, no corner is being spared. Attacks on hospitals and medical staff are a devastating indicator of how the war in Syria is waged, one of numerous brutal ways in which civilians are targeted,” she said.

The hospital was one of the few remaining medical centres in Aleppo and had pediatric and cardiology wards. One of the city's last remaining pediatricians was killed in the bombing.

“Aleppo is already a shell of what it once was, this most recent assault appears determined to eliminate even that,” Zancada said.

Also Friday, the Syrian army has declared a temporary truce for the capital, Damascus, its suburbs and the coastal province of Latakia - but not Aleppo.

It was not immediately clear what impact this unilateral declaration would have. The opposition seemed unlikely to abide by the truce after dozens were killed in government airstrikes in Aleppo.

The cease-fire is due to come into effect at 1 a.m. Saturday, according to announcement read on Syrian state TV. The military statement said it will last 24 hours in Damascus and its suburbs and three days in Latakia.

Yet in Aleppo, which has once more become the civil war's main battleground, aid agencies warned of a potential humanitarian disaster following the collapse of a two-month US and Russia-brokered cease-fire and the stalling of peace talks in Switzerland.

In Geneva, the U.N. High Commissioner for Human Rights said the latest reports of civilian deaths in Syria revealed a “monstrous disregard for civilian lives by all parties to the conflict.”

In a statement released Friday, Zeid Ra'ad Al Hussein urged all sides to step back from a return to an all-out war.

The U.N. official said “the violence is soaring back to the levels we saw prior to the cessation of hostilities” in late February. He added that targeting medical facilities and markets could “amount to war crimes.”

According to the Observatory, airstrikes and shelling in Aleppo killed 202 civilians in the past week - 123 in rebel-held parts of the city and 71 and government-held areas. It said the dead included 31 children on both sides.

State TV reported that over the past week, 85 people were killed and more than 600 wounded in government-held areas alone.