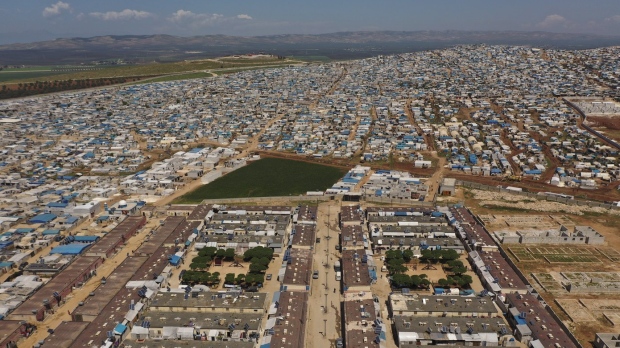 FILE - An aerial view shows a large refugee camp on the Syrian side of the border with Turkey, near the town of Atma, in Idlib province, Syria, April 19, 2020. Syrians in the last major rebel stronghold in the war-ton country are living in fear of the effects of Russia closing down the only border crossing into the northwestern province of Idlib. Aid agencies warn that if Russia vetoes the resolution that would maintain two border crossing points from Turkey to deliver humanitarian aid, food would be depleted in Idlib and surrounding areas by September, 2022, putting the lives of some 4.1 million people, at risk. (AP Photo/Ghaith Alsayed, File)

IDLIB, Syria (AP) — Over the past two years, Adila Afesh has seen the food assistance her Syrian family receives shrink by nearly two-thirds.

Now, she fears Russia — perhaps seeking to retaliate against Western sanctions over its invasion of Ukraine — will block the renewal of a U.N. Security Council resolution that allows aid to be delivered from Turkey to Syrians who, like her family, live in the rebel-run Idlib province.

Such a move would mean Afesh and her seven children — along with 4 million others in Idlib — will have to survive on even less.

“If, God forbid, aid is stopped, it means that they have sentenced us to death. Death by hunger,” she said on a recent day in the tent she lives in with her family, her cat deep asleep in her lap as her children played nearby.

The jobless woman says the family survives on two meals a day, mostly made up of rice or bulgur. Soon, she says, “we might have to fight in order to get a bite of food.”

Russia, a main backer of Syrian President Bashar Assad, has long wanted to shut down the Turkey route, seeking to have aid delivered solely through government-controlled areas. Opposition activists and residents warn that is something the authorities in Damascus would exploit as a pressure tactic against Syria’s main rebel stronghold of Idlib.

In 2014, aid flowed into Syria from four border crossings. Since then, U.N. Security Council permanent member Russia forced the council to close three of the four crossings. It kept one in the north, the Bab al-Hawa crossing with Turkey, for aid to flow into the rebel stronghold destroyed by 11 years of war.

In early July 2020, China and Russia vetoed a U.N. resolution that would have maintained two border crossing points from Turkey to deliver humanitarian aid to Idlib. Days later, the council authorized the delivery of aid through just one of those crossings, Bab al-Hawa. That one-year mandate was extended and expires this weekend. A vote to renew it is set for Thursday in New York.

Aid agencies warn that if Russia vetoes the resolution, food would be depleted in Idlib and surrounding areas by September, putting the lives of some 4.1 million people, many of them displaced by the conflict and living in tent settlements, at risk.

On Wednesday in New York, Russia proposed amendments proposing a six-month renewal, rather than the one year extension sought by others on the Security Council, according to a draft resolution obtained by The Associated Press.

Afesh, 37, who was displaced from the northern city of Aleppo in 2016, said her main concern before moving to Idlib province used to be where to hide with her four sons and three daughters from government airstrikes. Since December 2016, the family that lost its main bread winner seven years ago has been living in relative calm close to the Turkish border. But soon they might not have food on the table.

Syria's economy is suffering its worst period since the crisis began in 2011. That's the result of an array of troubles, including crippling Western sanctions, widespread corruption, coronavirus, rising food prices because of the war in Ukraine and an economic meltdown in neighboring Lebanon — Damascus’ main gate to the outside world and home to 1 million Syrian refugees.

“The situation in Syria has always been highly politicized, but this year the stakes are clearly higher with everything that’s going on in Ukraine and the tensions between Russia and the United States and European countries,” said Mark Cutts, the U.N.’s deputy regional humanitarian coordinator.

Cutts told The Associated Press that, “people will certainly die” if the Security Council resolution is not extended. He added there would be a massive crisis as hospitals go without the necessary medical supplies and people will not get the vaccinations they need.

Cutts said delivering aid through Turkey is direct and sufficient. If aid has to come through government areas, it will have to pass through an active front line. “This is still a war zone,” he said.

He said that over the past 12 months, five convoys have crossed from government-controlled areas while 800 trucks cross from Turkey every month. He said last year they were reaching 2.4 million people in northwest Syria and if there is funding, more should be reached.

Abdul-Razzaq Awad, a manager at Syria Relief, a local aid group, warned that aid agencies now are offering 50% of what they used to give due to the war in Ukraine. He said that if Bab al-Hawa is closed and aid has to come from government-controlled areas, he expects it to drop to about 20% of what used to be delivered before the Ukraine war.

In late June, 29 aid agencies came together to share one message, which is that a humanitarian “catastrophe will happen” should the U.N. Security Council fail to allow lifesaving aid and services to be delivered across the border.

At stake is access to food, vaccinations against COVID-19, critical medical supplies and essential services including health care, access to clean water and education for millions of Syrians.

“Removing this channel of assistance will have devastating humanitarian impacts on civilians and that there is no viable alternative,” said the agencies, including International Rescue Committee, CARE International, World Vision International, Save the Children, Norwegian Refugee Council and Mercy Corps.

“Now it is the time for the U.N. Security Council to correct course and show it can put people’s lives above politics,” said David Miliband, president of the International Rescue Committee.

Russia has argued that aid delivery should be handled by the government, claiming that militant groups are handling the deliveries in the current setup.

In May, Russia’s deputy U.N. ambassador Dmitry Polyansky told the Security Council that “we are not okay” with preserving the status quo at any cost. The most powerful group in Idlib, al-Qaida-linked Hayat Tahrir al-Sham, threatens humanitarian assistance, Polyansky noted.

Cutts, the U.N. official, said the world should do something for residents of northwest Syria.

“This is actually one of the most vulnerable civilian populations anywhere in the world,” he said.