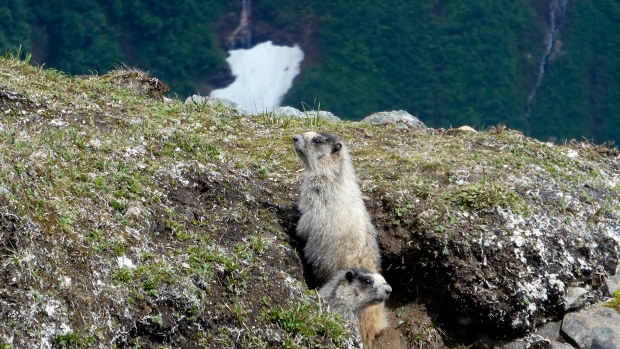 In this Saturday, June 27, 2020 photo Hoary marmots peer out of a hole on Gold Ridge in Juneau, Alaska. A Mongolian teenager contracted bubonic plague after eating meat from a marmot. (AP Photo/Becky Bohrer)

The Health Ministry said laboratory tests confirmed the teenager died of plague that he contracted from an infected marmot, according to the Montsame News Agency.

The case prompted the government to impose a quarantine on a portion of the province of Gobi-Altai. Montsame said 15 people who had contact with the boy were isolated.

In an unrelated case in neighbouring China, a patient who was infected with plague in the northern region of Inner Mongolia is improving, according to China's official Xinhua News Agency.

Xinhua said 15 people who had close contact with the patient were released from quarantine on Sunday. The agency said the government ended its top-level emergency response.

An official announcement earlier said a warning for the public in the Bayannur region of Inner Mongolia to avoid eating marmot and to report dead animals would last through the end of 2020.