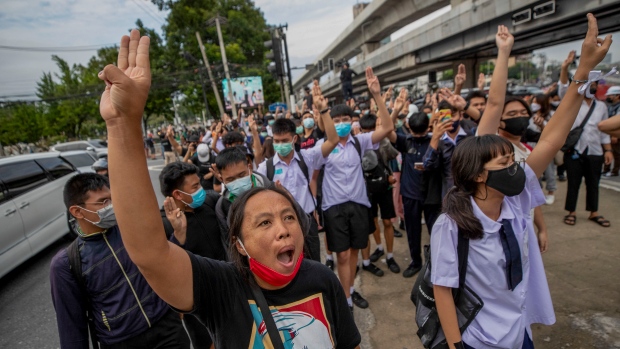 BANGKOK - Thai authorities worked Monday to stem a growing tide of protests calling for the prime minister to resign by threatening to censor news coverage, raiding a publishing house and attempting to block the Telegram messaging app used by demonstrators.

The efforts by Prime Minister Prayuth Chan-ocha's government to drain the student-led protests of support and the ability to organize comes as demonstrations have grown in the capital and spread around the country, despite an emergency decree, which bans public gatherings of more than four people in Bangkok, outlaws news said to affect national security and gives authorities broad power to detain people.

Thousands of mostly young protesters massed in northern Bangkok on Monday evening, as they have in various locations in the capital over the past six days to push their demands, including a controversial call for reform of the monarchy. At one point, they raised their arms in unison and flashed a three-fingered salute, a sign of resistance borrowed from “The Hunger Games” movie series. As night fell, they held their cellphones up, and the points of light dotted the crowd.

Elsewhere, protesters gathered outside a prison where more than a dozen demonstrators were being held.

The protesters charge that Prayuth, an army commander who led a 2014 coup, was returned to power unfairly in last year's general election because laws had been changed to favour a pro-military party. The protesters say a constitution written and passed under military rule is undemocratic.

But their more recent demand for checks and balances on the monarchy has deeply angered conservative Thais - and broken a taboo since the monarchy is considered sacrosanct and tough laws protecting it from insult mean its role is not usually discussed openly. It has also raised the risk of confrontation in a country where calls for political change have a history of being met with military intervention or even violence.

Authorities have used water canons to disperse protesters in recent days and detained some. Several protest leaders who were arrested for trying to stage an overnight rally last week outside the prime minister's office were freed by an appeals court Monday. Protest-related charges are still pending against them.

Authorities are now increasingly turning to censorship to try to clamp down on the demonstrations after protesters heckled a royal motorcade last week in a once unthinkable scene.

With protests continuing, a top official with the National Broadcasting and Telecommunications Commission confirmed reports that the agency had been ordered to block access to the messaging app Telegram. Suthisak Tantayothin said it was talking with internet service providers about doing so, but so far the encrypted messaging app favoured by many demonstrators around the world was still available in the country.

Police also searched the office of a publishing house that handles books by Thai and foreign scholars with sometimes controversial perspectives. Same Sky publishing house said police took away copies of three titles that had been sold at a recent book fair in a bundle it called Monarchy Studies, and asked their publisher to come for questioning at their station.

Deputy police spokesman Kissana Phataracharoen also confirmed an order signed by the chief of police that could allow officials to block access to news sites that give what he called “distorted information.”

Under existing laws, the National Broadcasting and Telecommunications Commission and the Ministry of Digital Economy and Society are empowered to ban broadcasts and block internet content. Police themselves can also do so under the emergency decree, which went into effect Oct. 15.

Kissana spoke after a leaked copy of the censorship request circulated on social media. The order calls for blocking access to the online sites of Voice TV, The Reporters, The Standard, Prachatai, and Free Youth, and removing their existing content. It also proposes a ban on Voice TV's over-the-air digital broadcasts.

All the outlets have been broadcasting live coverage of the protests. Voice TV and Prachatai are openly sympathetic to the protest movement, and Free Youth is a student protest organization. As of Monday, none had been blocked. At least one local cable TV provider, however, has been censoring international news broadcasts during their segments on the Thai protests.

The Foreign Correspondents Club of Thailand said it was “deeply concerned” by the censorship threat, adding that it “makes the government appear heavy-handed and unresponsive to criticism, and could stir up even more public anger.”

“Bona fide journalists should be allowed to report important developments without the threat of bans, suspensions, censorship or prosecution hanging over them,” the club said in a statement.

Despite the spread of protests outside the capital, Prayuth, the prime minister, told reporters the state of emergency will remain only in Bangkok for now.

In addition the emergency decree making protests illegal, authorities have also tried in vain to keep people from gathering by selectively shutting down stations on Bangkok's mass transit lines. It has also warned that it will take legal action against those who promote the protests on social media, including by taking photographs there or checking into them on social media apps.

Despite that, protest-related hashtags remain the most used on Twitter.

One of the many student groups involved in organizing the protests, Free Youth, recently said its Facebook account might soon be blocked and asked people to sign up for Telegram. Within about a day, it had 200,000 subscribers on the app.

Prayuth said Monday that the government is open to an extraordinary session of Parliament to seek a solution to the current situation. It was not clear when that might be held.