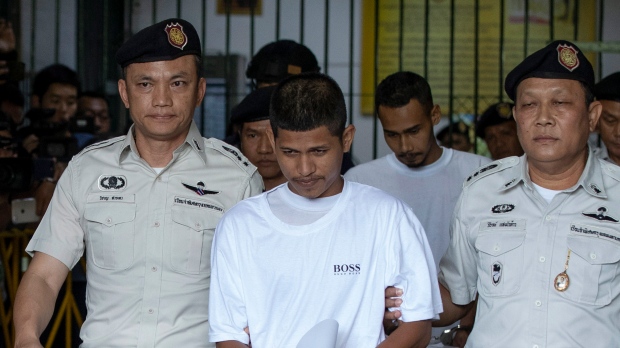 BANGKOK -- A court in Thailand on Thursday extended the detention of two suspects accused of planting two small bombs in front of police headquarters in Bangkok while Southeast Asian foreign ministers were meeting nearby.

The two men were arrested as they travelled south just hours after the devices were found unexploded on Aug. 1. Ten small bombs exploded at various points in Bangkok on Aug. 2 as the meeting of the Association of Southeast Nations continued with U.S. Secretary of State Mike Pompeo in attendance.

Police are seeking four other suspects in addition to the two in custody.

Wildon Maha and Lu-ai Saengae, who were heavily guarded by a police SWAT team as they arrived Thursday at Bangkok Criminal Court, are from the southern province of Narathiwat and were apprehended on a bus at a police checkpoint on Aug. 2.

Deputy Prime Minister Prawit Wongsuwan said last week that the suspects were from Thailand's south, where Muslim separatist insurgents are active, but he did not cite a motive for the attacks. More than 7,000 people have died in violence in the south since 2004.

Prawit said Wednesday that Thai authorities are in contact with a neighbouring country where the bombing plan is believed to have been plotted and some bombers had fled to. He refused to name the country, but appeared to be referring to Malaysia, which borders southern Thailand and where there are sympathizers of the separatist movement.

Authorities are pursuing four charges against the suspects in custody -- co-operating in criminal activity, possessing explosive devices, attempted manslaughter and handling explosive devices in public spaces. Thai media have reported they have denied the allegations, but the police say they have gathered enough evidence to press charges.

Southern separatists have employed car bombs and roadside bombs, but generally confined their activities to three southernmost provinces, the only ones with Muslim majorities in the predominantly Buddhist country. However, they are suspected of carrying out a series of bombings in 2016 at several popular resort areas outside their home turf, killing four people.