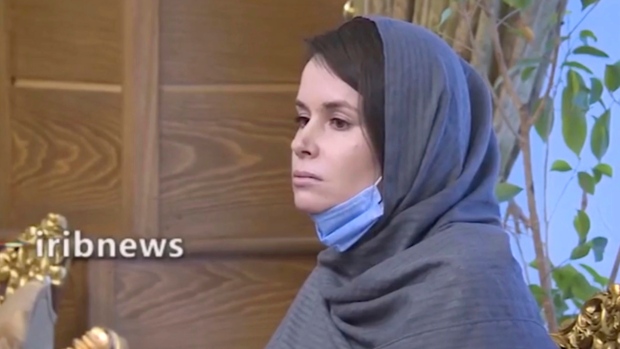 BANGKOK - Thailand said Thursday it transferred three Iranians involved in a botched 2012 bomb plot back to Tehran, as Iran released an Australian academic who was imprisoned for more than two years on spying charges.

While Thai officials declined to call it a swap and Iran referred to the men as “economic activists,” the arrangement freed academic Kylie Moore-Gilbert and saw the three men linked to a wider bomb plot targeting Israeli diplomats return home to a hero's welcome.

The bombers wore Iranian flags draped over their shoulders, their faces largely obscured by black baseball caps and surgical masks. It was a sharp contrast to other prisoner exchanges Iran has trumpeted in the past, in which television anchors repeatedly said their names and broadcasters aired images of them reuniting with their families.

The reason for Iran's refusal to name those freed remains unclear. However, Tehran has long denied being behind the bomb plot and likely hopes to leverage the incoming administration of U.S. President-elect Joe Biden to ease American sanctions imposed by President Donald Trump. Israeli officials declined to immediately comment on the release.

In Australia, Prime Minister Scott Morrison said he was “thrilled and relieved” that Moore-Gilbert, 33, had been released but added that it would take time for her to process her “horrible” ordeal.

“The tone of her voice was very uplifting, particularly given what she has been through,” Morrison told Australia's Network Nine.

Chatchom Akapin, Thailand's deputy attorney general, told The Associated Press that Thai authorities had approved the transfer of the prisoners under an agreement with Iran.

“These types of transfers aren't unusual,” he said. “We transfer prisoners to other countries and at the same time receive Thais back under this type of agreement all the time.”

A Thai Corrections Department official, who spoke on condition of anonymity as no approval had been granted to speak publicly on the issue with journalists, said only two of the Iranians were sent home Wednesday under the prison transfer agreement, while one received a pardon in September.

Under transfer agreements, returnees are supposed to serve the remainder of their sentences in their home country. Thailand has such agreements with about three dozen countries. However, Iranian state television video of the men's arrival suggested that a return to prison seemed unlikely as officials showered them with flowers and offered shouted praise to God and the Prophet Muhammad.

The plane that carried the men from Bangkok to Iran had a tail number linking it to an Australian private air carrier called Skytraders, which describes itself as a “principal provider of air services to government.” An employee at the company declined to comment when reached by the AP.

The plane had flown twice this week from Bangkok to Tehran, and then on to Doha, Qatar, flight data obtained by the AP showed. Authorities declined to say where Moore-Gilbert was Thursday, though she thanked Australia's government and diplomats in a statement for securing her release, as well as supporters who campaigned for her freedom.

Despite her ordeal, Moore-Gilbert said she had “nothing but respect, love and admiration for the great nation of Iran and its warm-hearted, generous and brave people.”

Asked about the swap, Australia's prime minister said he “wouldn't go into those details, confirm them one way or the other.” However, Morrison said he could assure Australians there had been nothing done to prejudice their safety and no prisoners were released in Australia.

Thai police discovered the three Iranians' plot in 2012 when an accidental explosion blew apart their rented Bangkok villa. At the time, Iran was suspected in two bombing attempts in India and the former Soviet republic of Georgia targeting Israeli diplomats amid heightened tensions over its nuclear program. Its own nuclear scientists, meanwhile, had been killed in attacks long suspected to have been carried out by Israel.

Police say one of the Iranians, Saeid Moradi, threw a grenade at officers that bounced backed and exploded, shearing away his legs. Moradi was sentenced to life for attempting to murder a police officer. Another man, Mohammad Kharzei, received a 15-year sentence for possessing explosives. The sentence of the third man, Masoud Sedaghatzadeh, wasn't immediately known.

Kharzei was the Iranian who was said to have been pardoned this past September, the Thai corrections official said.

Their release along with Moore-Gilbert's represents another case in which Iran held a Westerner on widely criticized espionage charges. Activists and U.N. investigators believe Iran systematically leverages their imprisonment for money or influence in negotiations with the West. Tehran denies it, though there have been similar exchanges in the past.

Moore-Gilbert was a Melbourne University lecturer on Middle Eastern studies when she was picked up at the Tehran airport as she tried to leave the country after attending an academic conference in 2018. She was sent to Tehran's notorious Evin prison, convicted of spying and sentenced to 10 years. She vehemently denied the charges and maintained her innocence.

Moore-Gilbert wrote in letters to Morrison that she had been imprisoned “to extort” the Australian government.

Her detention had strained relations between Iran and the West at a time of already escalating tensions, which reached a fever pitch earlier this year following the American killing of a top Iranian general in Baghdad and retaliatory Iranian strikes on a U.S. military base.

International pressure had been building on Iran to release Moore-Gilbert. She had gone on repeated hunger strikes and her health had deteriorated during long stretches in solitary confinement. She also alleged Iran subjected her to “grievous violations” of her rights, including psychological torture.