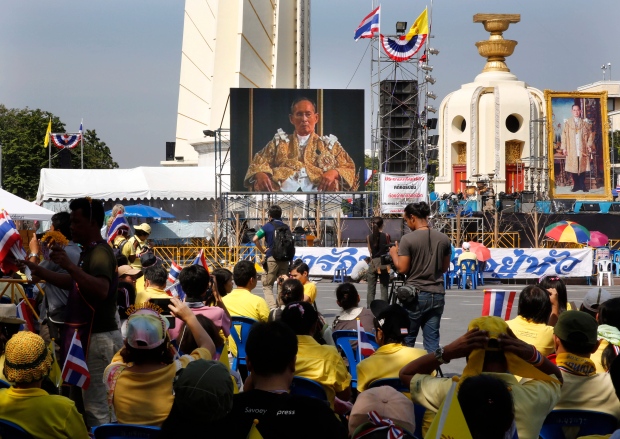 BANGKOK, Thailand -- Thailand's revered King Bhumibol Adulyadej marked his 86th birthday on Thursday with a call for national unity and stability, but offered no further guidance on how his polarized nation might find its way out of its bitter political standoff.

Many people had hoped the visibly infirm king would use his annual birthday speech to step in -- as he has in the past -- to broker peace in the conflict that has led to street fighting by anti-government mobs seeking to occupy the prime minister's office and other official buildings.

The protesters and the government of Prime Minister Yingluck Shinawatra called a truce in their battling as a mark of respect for the monarch. The violence has killed five people and wounded at least 277 since last weekend.

Onlookers wept as the king delivered his brief address with great effort in a weak voice, pausing for long periods of time.

"Our country has long experienced happiness because we have been united in performing our duties and working together for the good of the whole country," said the king, garbed in a ceremonial golden robe and sitting on a throne.

"All Thais should consider this very much and focus on doing their duties ... which are the security and stability of the country," he said.

The king's appearance renewed concern about his health and whether he physically is able now to help heal the country's divide.

As a constitutional monarch, he has no official political role, but no other person commands the same moral authority.

The many prominent people in attendance at Thursday's speech -- the privy councillor, the prime minister and Cabinet members, opposition leader and senior statesmen -- looked sombre and troubled by the king's appearance.

The current standoff results from years of enmity between supporters and opponents of Yingluck's brother, former Prime Minister Thaksin Shinawatra, who was ousted in a 2006 military coup after being accused of corruption and disrespect for the king.

Thaksin, a billionaire, fled overseas to avoid a corruption conviction, but critics say he still controls Thai politics through his sister and his political machine.

Kevin Hewison, a Thai politics scholar at Australia's Murdoch University, described the king's remarks as "an essentially conservative message that may have some resonance at this time."

"I expect both sides to claim that the message needs to be heeded by the other side," he said.

The king's infirmity also uncomfortably raised the seldom-addressed inevitable succession of royal power. In July he ended a nearly four-year hospital stay to live at a palace in the seaside town of Hua Hin, where he delivered his speech.

Royalists -- generally opposed to Thaksin and his political machine -- worry that the prince may lack the moral stature to effectively take over his father's job.

Both pro- and anti-Thaksin camps want to be in power when the transition occurs so they can influence it.

In Hua Hin, crowds dressed in yellow, the royal colour, lined the roads to catch a glimpse of the world's longest-reigning monarch. They shouted "Long live the king!" as his motorcade drove slowly to Klai Kangwon Palace, which literally means "Far From Worries."