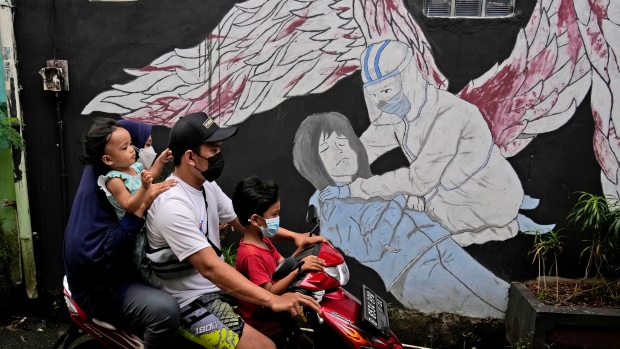 A family wearing masks to help curb the spread of coronavirus outbreak rides on a motorbike past a COVID-19-related mural honoring health workers in Jakarta, Indonesia, Saturday, Jan. 29, 2022. Indonesia is bracing for a third wave of COVID-19 infections as the highly transmissible omicron variant drives a surge in new cases, health authorities and experts said Saturday. (AP Photo/Dita Alangkara)

The country reported 9,905 new infections and seven deaths on Friday in the latest 24-hour period. It was the highest daily caseload since August last year when the country was struggling to contain a delta-driven wave.

Indonesia had recovered from last year's spike in cases and deaths that was among the worst in the region, and daily infections had fallen to about 200 by December. But cases are rising again just weeks after the country reported its first local omicron case

Health Minister Budi Gunadi Sadikin said the next few months will be critical because omicron is spreading “rapidly and massively.”

“Its upsurge will be extremely fast ... We will see a sharp rise in the near future,” he told a news conference Friday, adding that the current wave would likely peak at the end of February or in early March.

Bed occupancy rates in the capital, Jakarta, the epicenter of the country's omicron outbreak, rose from 5% in early January to 45% on Saturday, said Jakarta Deputy Governor Ahmad Riza Patria. He said “omicron is moving too quickly” in the city, where more than 80% of the 10 million residents have been vaccinated.

Pandu Riono, an Indonesian epidemiologist and academic adviser to the government, said Indonesians are still traumatized from the delta variant when many died in isolation at home or while waiting to receive emergency care as hospitals were swamped.

During last year's surge, hospitals erected plastic tents to serve as makeshift intensive care units, and patients waited for days before being admitted. Oxygen tanks were rolled out on the sidewalk for those lucky enough to receive them, while others were told they would need to find their own supply.

Riono said a third wave would be unlikely to push Indonesia's healthcare system to the brink of collapse because omicron generally causes less-severe symptoms than delta.

President Joko Widodo on Friday urged asymptomatic patients to self-isolate at home for five days and to use telemedicine services through which they can access doctors, medicines and vitamins for free, or to visit a community health center.

“This is important so that our healthcare facilities can focus on treating patients with more severe symptoms or patients of other diseases that need intensive care,” Widodo said.

Some health experts doubt the measures will be enough, given the lax enforcement.

Dicky Budiman, an epidemiologist at Griffith University in Australia, said a third wave of infections is inevitable as long as a large portion of Indonesia's population remains unprotected against COVID-19. As of Friday, only 61 percent of Indonesia's 208 million people eligible for shots were fully vaccinated.

Overall, Indonesia, a vast archipelago nation that is home to 270 million people, has reported more than 4.3 million infections and 144,268 deaths from COVID-19.