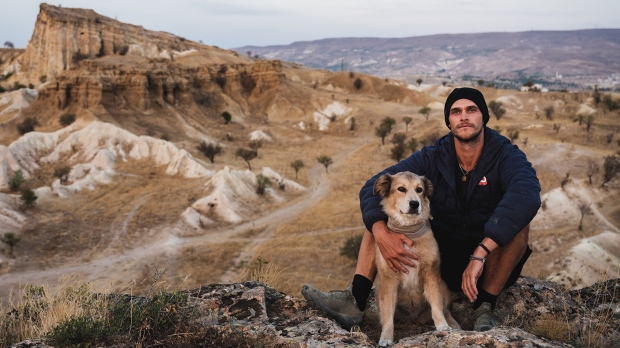 Tom Turcich, from New Jersey, and his dog Savannah spent seven years walking around the world together. (Courtesy: Tom Turcich)

(CNN) -- Very few people attempt to walk around the entire world, and even fewer actually manage to complete the journey.

On May 21, 2022 Tom Turcich, from New Jersey, became the 10th person on record to achieve this remarkable feat, while his four-legged companion Savannah was the first dog to do so.

The pair were greeted with a huge homecoming celebration attended by many of Turcich's friends and family, along with well wishers.

The triumphant moment brought about the end of a seven-year, 48,000-kilometer (29,826-mile) journey that he'd spent even longer working toward.

"It was very surreal," Turcich tells CNN Travel from his parent's home in Haddon Township. "I had imagined what the ending would be like for a long time. And when it happened, there were people lining the streets and walking with me.

"The primary emotion was just relief. This had dominated my life for 15 years, and to finally be able to kind of put it behind me was amazing."

The inspiration for the trip stemmed from a sad loss in 2006, when his long-time friend Ann Marie died in a jet ski accident at the age of 17.

"It [her death] was very formative for me," he explains. "She was a much better person than me. And it sunk in that I was going to die [one day] and it could happen at any moment. And I started re-evaluating everything."

Turcich, who has been compared to Forrest Gump, the character Tom Hanks played in the 1994 movie, decided he needed travel and adventure in his life and began looking into all the different ways he could

After reading about Steven Newman, listed by Guinness World Records as the first person to walk around the world, and walking adventurer Karl Bushby, who has been circumnavigating the globe on foot since 1998, Turcich became set on taking on this challenge himself.

Once he'd committed to the task, Turcich started planning out the route, while also trying to raise funding for his travels.

He managed to save enough to last him around two years on the road by working during the summer while he was at college, and moving back in with his parents after he graduated.

However, shortly before he was due to leave, the owner of a local company, Philadelphia Sign, found out about his plans and decided to sponsor his trip.

"He [the businessman] happened to know Ann Marie and her family," he says. "And he just wanted to support me however he could."

Almost nine years after he first came up with the idea, Turcich took the first step of his walk around the world.

He set off on April 2, 2015, just before his 26th birthday, pushing a baby stroller containing hiking gear, a sleeping bag, a laptop, a DSLR camera and a plastic crate, which he used to store his food.

Turcich says he devised his route with two major factors in mind -- he wanted to "hit every continent and travel with as little bureaucratic trouble" as possible.

"I thought it would be about five and a half years," he says. "And that proved pretty accurate for the actual walking."

The entire journey ended up taking seven years, mainly due to two significant delays. The first occurred when Turcich fell ill with a bacterial infection, which took him several months to recover from, and the second was due to the Covid-19 pandemic.

He inevitably experienced various highs and lows along the way, including being invited to local weddings in both Turkey (or Türkiye) and Uzbekistan and being held at knife point while in Panama.

Before he began the walk, Turcich had done very little traveling other than visiting England, Ireland and Wales during a high school exchange trip, and he'd also holidayed in Canada and the Dominican Republic.

He also wasn't hugely experienced in hiking, although he'd previously completed a 10-day hike with a friend, as well as a few weekend hikes.

The first stage of the trip saw him walk from New Jersey to Panama. Around four months in, Turcich acquired his walking companion, puppy Savannah, from an animal shelter in Austin, Texas.

While he initially had no intention of getting a dog, Turcich struggled to relax, particularly while bedding down at campsites, and would constantly wake up during the night convinced he could "hear something coming."

He felt that having a furry friend beside him who could "keep watch" at night would make all the difference, and this has proved to be true.

"She's been fantastic," he says of Savannah. "It's just nice to have someone to share some moments with."

Once they reached Panama, the pair flew over the Darien Gap, a treacherous stretch of jungle between Panama and Colombia. After that first year on the road, Turcich set up an account with donation platform Patreon so that his followers had the option to help fund his travels.

Much of year two was spent walking from Bogota, Colombia to Montevideo, Uruguay, where they took a boat to Antarctica.

Around this point, Turcich briefly returned home to acquire the paperwork required to travel to Europe with Savannah.

After arriving in Europe, the pair walked across Ireland and Scotland, but were forced to take an extended break when Turcich became too ill to continue.

"I kind of threw in the towel there [in Scotland] and went to London," he says, explaining that he was in and out of hospital for weeks while in the UK and eventually returned home to the US to recover.

Turcich, who documented his journey on Instagram and his blog The World Walk, resumed the walk Copenhagen in May 2018, but it would be a while before he was back to his usual self, both mentally and physically.

"When you're out walking, and you're spending all this time alone, you really have to be good company [to yourself]," he explains.

"Especially when you're exposed to the elements all the time. And so it really was not fun for me at all."

Although Turcich admits that he started to question whether he could keep going, he says he never seriously considered giving up.

"There were definitely times when I was just really not in a good place," he says. "And I was thinking, 'what am I doing out here? I could be with my family and my friends, and instead I'm walking through this cold rain in Germany.

"But I don't think I ever would have stopped. I'd been thinking about the walk for eight years before I even began it. So it just would be insane to give up after a couple of years."

It wasn't until he walked the Camino de Santiago, a pilgrimage that encompasses several routes in Spain, France and Portugal, that he started to feel "fully remembered" and ready to immerse himself into the voyage fully again.

He and Savannah then crossed over to North Africa, where they walked through Morocco, Algeria, where he had a police escort, and Tunisia.

From here, they moved through Italy, Slovenia, Croatia, Montenegro, Albania and Greece. After Greece, they headed to Turkey, where Turcich became the first private citizen to be permitted to cross the Bosphorus Bridge on foot.

Then they traveled to Georgia, situated between Russia and Turkey, in the Caucasus Mountains, and onto Azerbaijan, a transcontinental country located at the boundary of Eastern Europe and Western Asia, just as the pandemic hit. This ultimately meant they were forced to remain in Azerbaijan for at least six months.

"Then it was just kind of waiting until we could get into any of Central Asia," says Turcich, who'd originally aimed to travel through Uzbekistan, Kyrgyzstan, Kazakhstan, Mongolia, before flying to Australia, and then back to the US.

Unfortunately, the strict travel restrictions in place at the time meant Turcich had to abandon plans to visit Australia and Mongolia -- both destinations were closed to international visitors for around two years -- along with Kazakhstan.

After walking across Kyrgyzstan, a small country in Central Asia bordering China, he and Savannah flew to Seattle in August 2021, and began making their way home to New Jersey.

Of all the places he traversed during the voyage, Turcich says that Wyoming, the least populated US state, was the most difficult.

"It's desolate out there," he says, recalling how he and Savannah walked for an entire weekend without seeing so much as a store or even a person, before finally coming across a tiny gas station.

"That totally caught me off guard. I came back to the US thinking, 'I'm back home. It's so developed. This is a piece of cake.' But I may as well have been in the deserts of Chile or Peru."

During their world walk , the pair walked across six continents and 38 countries together, spending most nights camping.

Guinness World Records sets the requirements for a circumnavigation on foot as traveling 18,000 miles (around 30,000 kilometers,) and crossing four continents -- a goal surpassed by Turcich.

"The thing about Savannah was that she had so much more energy than I did, always," he says. "This [walking from country to country] is all she's ever known.

"There were times when we were going through the desert and I would collapse at the end of the day and she'd come over with a stick and want to play."

Once they were firmly back on US soil, Turcich was more eager than ever to complete the lengthy trek and get back to normal life.

"Seven years is a long time," he says. "Once the end was in sight, I just couldn't wait to be back. I was just ready to be hanging out with my friends and family again, and not be packing up my tent every single morning."

His late friend Ann Marie's family were among those there to greet him at his homecoming celebration, and while Turcich stresses that he doesn't want to speak for them, he'd like to think that his voyage and the attention that it's garnered may have helped in some small way.

"I wasn't necessarily doing it for Ann Marie," he says. "But she was the catalyst and the inspiration behind it.

"Her death really inspired me to live. And once I finished it [the walk] and I was there with her family, it felt like they had a little bit of closure too."

Now that he's back in his hometown, Turcich is enjoying reconnecting with his friends, spending time with his family, along with his girlfriend, who he met during the final section of the trip.

Although he'd love to go to Mongolia, one of the places he couldn't travel to due to Covid-19 restrictions, at some stage, Turcich has no intention of bringing Savannah with him.

"The flight is insanely long, and she [Savannah] doesn't care about Mongolia," he says. "Maybe we'll get there one day, maybe not."

For now, he's focused on writing a memoir about his voyage, while Savannah is adjusting to being in one place all the time.

"My dad takes her for a four-mile (around six and a half kilometers) walk around the river every morning," he says. "So that helps get out some of her energy. She comes back, jumps on the sofa and takes a nap. She seems pretty content here."

When asked if he's itching to get back on the road, Turcich says that it's the furthest thing from his mind. In fact, he has no plans to go anywhere for a long time.

"I want to enjoy life without walking and even traveling," he says. "I'm so over it right now. I just want to be in one place and get into a rhythm."

Tom Turcich and his dog in an orange field in Valencia, Spain back in 2018. (Courtesy: Tom Turcich)