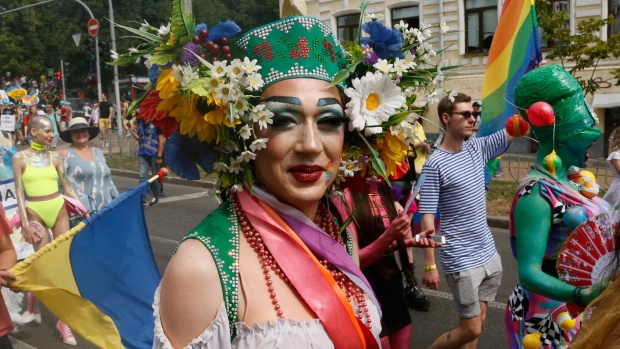 People take part in the annual Gay Pride parade, under the protection of riot police in Kiev, Ukraine, Sunday, June 23, 2019. Around five thousand LGBT activists and associations paraded in the center of Kiev. (AP Photo/Efrem Lukatsky)

MOSCOW - Thousands of supporters of LGBT rights have marched through the centre of Kyiv, the Ukrainian capital, under a heavy police presence to separate them from opponents.

Police said Sunday that nine people were arrested on suspicion of preparing provocations against participants in the Kyiv Pride event.

Ukrainian news reports estimated the number of marchers at about 2,500.

Several people protesting the march scuffled with police as the march assembled. Others stood along the route, shouting and holding a banner reading “Sodomy is the road to hell.”

Opponents of gay rights say homosexuality is contrary to Ukraine's traditional culture. In turn, a large banner at the head of the march declared that “our tradition is freedom.”