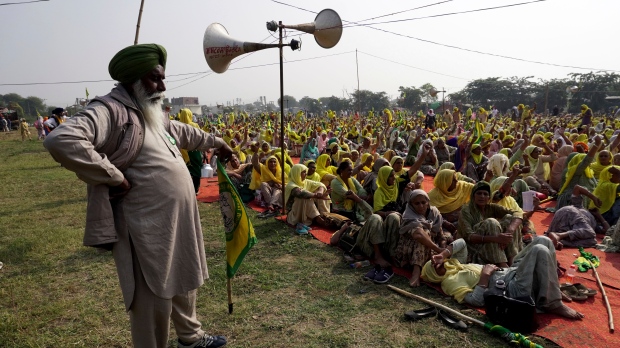 Farmers gather to mark the first anniversary of their protests at Bahadurgarh, near Tikri Border (Delhi-Haryana), on the outskirts of New Delhi, India, Friday, Nov. 26, 2021. Tens of thousands of farmers rallied on Friday marking one year of their movement that forced Prime Minister Narendra Modi to withdraw three agriculture laws that feared would drastically reduce their incomes and leave them at the mercy of corporations. (AP Photo/Mayank Makhija)

NEW DELHI - Thousands of jubilant Indian farmers waving green and white flags have marked the anniversary of their movement by celebrating a victory that forced Prime Minister Narendra Modi to withdraw agriculture laws the farmers feared would drastically reduce their incomes.

Using tractors, jeeps and cars, farmers from New Delhi's neighboring states last November converged on the highways on the outskirts of the capital, braving a harsh winter, a scorching summer and a devastating coronavirus surge.

Farmer groups are continuing to camp out at three key border points with New Delhi, waiting for the laws to be officially withdrawn during a parliament session scheduled to begin next week.

They say the laws would leave them at the mercy of corporations with no obligation to pay guaranteed prices.