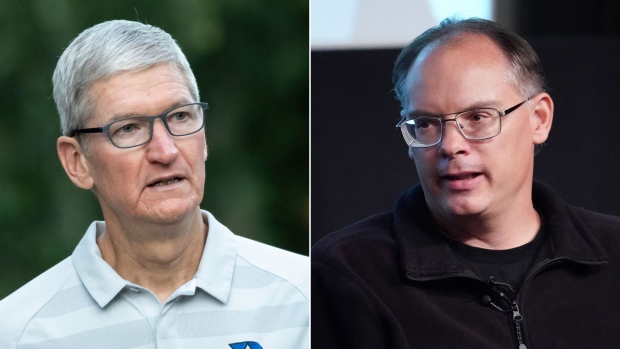 Apple and Epic are nearing their highly anticipated Fortnite trial and Apple CEO Tim Cook and Epic Games' founder and CEO Tim Sweeney are both expected to testify.(Getty Images via CNN)

Apple and Epic are nearing their highly anticipated Fortnite trial and plan to bring forward some top executives to testify in-person.

The case concerns a fallout between the maker of one of the world's most popular video games and the preeminent mobile device company over Apple's control of its App Store. Epic is suing Apple for alleged antitrust violations.

Apple CEO Tim Cook, software engineering chief Craig Federighi and Apple fellow Phil Schiller are a few of the executives that may testify, according to a court filing of tentative witnesses. Others include those who handle payment processing, combating fraud and those involved with App Store development, policies and tools.

"Our senior executives look forward to sharing with the court the very positive impact the App Store has had on innovation, economies across the world and the customer experience over the last 12 years. We feel confident the case will prove that Epic purposefully breached its agreement solely to increase its revenues, which is what resulted in their removal from the App Store," Apple said in a statement. "By doing that, Epic circumvented the security features of the App Store in a way that would lead to reduced competition and put consumers' privacy and data security at tremendous risk."

Epic Games' plans to call its founder and CEO Tim Sweeney and other senior executives to testify on matters such as its business model, financial performance and its campaign against app stores. Epic declined to comment.

The iPhone maker and creator of popular video game Fortnite have been ensnarled in a legal battle since last year after Apple removed the Fortnite game from its App Store in August. The removal came after Epic pushed a software update to the app that allowed players to circumvent Apple's proprietary in-app payment system of 30% -- which is contractually prohibited. Google also removed Fortnite from its store.

Sweeney believes that the requirement violated antitrust laws because it forced developers to use Apple and Google's payment systems. Epic then filed lawsuits against both tech companies after the store removals, arguing that the courts should intervene and order Apple and Google to allow developers to sell in-app purchases without the 30% revenue cut.

The Apple versus Epic Games trial could begin as early as May 3, according to court documents.

-- CNN's Brian Fung and Shannon Liao contributed to this report.