Trump, a late convert to cause, to join anti-abortion rally 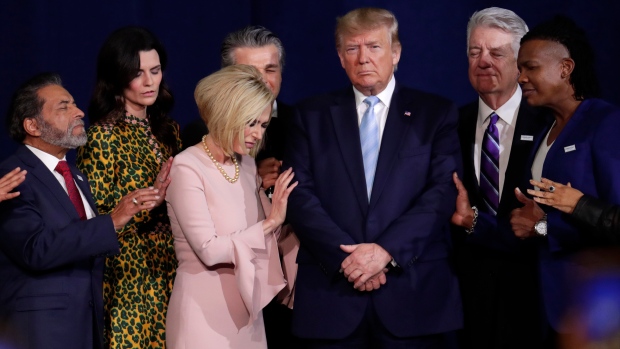 WASHINGTON - President Donald Trump vowed to stand with anti-abortion activists Friday as he became the first sitting president to speak at the March for Life, an annual gathering that is one of the movement's highest profile and most symbolic events.

“Today as President of the United States, I am truly proud to stand with you,” he told a crowd of thousands braving the cold on the National Mall. “Unborn children have never had a stronger defender in the White House.”

It was just four years ago when a political committee supporting one of Trump's Republican rivals unveiled an ad slamming his views on abortion, complete with footage from a 1999 interview in which he declared, “I am pro-choice in every respect.”

But on Friday, Trump was hailed in speeches and on signs as “the most pro-life” American president ever.

The reception was yet another sign of his remarkable political transformation and the fact that white evangelical and conservative Christians remain among Trump's most loyal backers. And the appearance made clear that, as he heads into the 2020 election, Trump is counting on those voters to help bring him across the finish line.

“I think it's a brilliant move,” said Ralph Reed, chair of the Faith and Freedom Coalition and one of Trump's most prominent evangelical supporters, of Trump's decision to become the first president to take the event's stage. Reed said the president's appearance would “energize and remind pro-life voters what a great friend this president and administration has been.”

It also shows how much times have changed.

Past presidents who opposed abortion, including Ronald Reagan and George W. Bush, steered clear of personally attending the march to avoid being too closely associated with demonstrators eager to outlaw the procedure. They sent remarks for others to deliver, spoke via telephone hookup or invited organizers to the White House - but never appeared at the march.

Over the last 10 years, however, the Republican Party has undergone a “revolution,” displaying a new willingness to “embrace the issue as not only being morally right but politically smart,” said Mallory Quigley, a spokeswoman for the Susan B. Anthony List and Women Speak Out PAC, which is planning to spend $52 million this cycle to help elect candidates opposed to abortion rights.

While views of abortion have remained relatively stable over two decades of polling - with roughly 6 in 10 Americans saying abortion should be legal in all or most cases, according to Pew Research Center - both the Republican and Democratic parties have taken harder-line positions for and against abortion rights.

“There used to be a middle in this country and candidates would not want to alienate the middle,” said Ari Fleischer, who served as White House press secretary under President George W. Bush. “And it just seems that that is over and that both parties play to their bases.”

During his first three years in office, Trump has embraced socially conservative policies, particularly on abortion. He's appointed judges who oppose it, cut taxpayer funding and painted Democrats who support abortion rights as extreme in their views.

“President Trump has done more for the pro-life community than any other president, so it is fitting that he would be the first president in history to attend the March for Life on the National Mall,” said White House spokesman Judd Deere.

On Friday, his administration took another step, threatening California with the potential loss of federal health care funding over the state's requirement that insurance plans cover abortions. Meanwhile, Trump's campaign announced the creation of a new campaign coalition, “Pro-life Voices for Trump.”

Trump's thinking on the matter has been simple: If he supports the cause, “why wouldn't he show up to their big event?” said Matt Schlapp, chair of the American Conservative Union and a close ally of the White House. He said the appearance would be deeply significant for participants and “cement even tighter the relationship” Trump has with conservative activists across the country.

“I've had people be moved to tears over the fact that he's going,” said Schlapp. “It's a big deal,”

March attendees began streaming onto the Mall early Friday morning, many holding signs with slogans like “MAKE UNBORN BABIES GREAT AGAIN!” and I VOTE PRO-LIFE FIRST.“ In some ways, it had the feel of a Trump campaign rally, with vendors selling pro-Trump buttons and hats.

“I am very impressed with him. It takes a lot of guts to do something that nobody else has done before,” said Janet Peterson, who travelled from South Carolina for the event, and credited Trump's decision to appear on his New York roots.

“If you tell them, `This isn't the status quo' or `We don't do it this way,' they're more likely to give you a double middle finger and do it,” she said.

Trump used his speech, in part, to attack Democrats for embracing what he labeled “radical and extreme positions” on abortion, and praised attendees, saying they were motivated by “pure, unselfish love.” Vice-President Mike Pence, who was travelling in Italy Friday, also appeared via video recorded at the Vatican following a meeting with Pope Francis.

The full embrace underscored Trump's dramatic evolution on the issue of abortion from his days as a freewheeling New York deal-maker, when he described himself as “very pro-choice” in a 1999 interview on NBC's “Meet the Press.”

By 2016, however, Trump said his views had changed and that he was now opposed to abortion except in the case of rape, incest and when the life of the mother is at risk.

And to the surprise of many, he has been embrace by the movement.

“These voters who are pro-life love Donald Trump and they will crawl across broken glass to get him re-elected,” said Reed, who credited Trump with having “masterfully capitalized on his pro-life position in a way I think no one could have envisioned four years ago,”

Critics, meanwhile, accused Trump of using the march to try to distract from his impeachment trial in the Senate, with Ilyse Hogue, the president of NARAL Pro-Choice America, calling it “an act of desperation, plain and simple.”