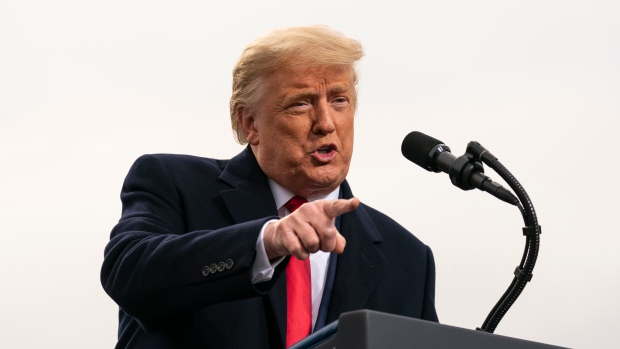 HARRISBURG, Pa. - In a late gambit to win the battleground state of Pennsylvania, President Donald Trump and his GOP allies have intensified attacks on Joe Biden over fracking, hoping to drive a wedge between the former vice-president and the white, working-class voters tied to the state's booming natural gas industry.

That assault is playing out in a barrage of TV ads and conservative and right-wing websites, and is repeated at every Trump rally in the state.

It relies on a series of confusing statements from the former vice-president - including remarks on the oil industry from last week's debate - to claim he intends to “ban” or end national gas extraction, although that is not the Democrat's official position.

Trump's fracking play comes as polls show the president is struggling to overtake Biden in Pennsylvania and in need of a boost from the rural and exurban white voters who helped him to a narrow victory in Pennsylvania in 2016.

It also shoots to snap the tightrope that Biden is walking between the Democratic Party's left wing, which is hostile to fossil fuels, and its bedrock blue-collar union base that is building an expanding network of gas pipelines, power plants and processing facilities in Pennsylvania.

Biden's climate change plan aims to reach net-zero greenhouse gases emissions by 2050, and does not involve banning fracking, the process formally named hydraulic fracturing that along with horizontal drilling made the United States an oil and gas superpower over the past decade.

He argues that net-zero threshold can be achieved by helping eliminate emissions from natural gas infrastructure, while redirecting federal subsidies for oil and gas to cleaner energies.

“I do rule out banning fracking because ... we need other industries to transition to get to ultimately a complete zero-emissions,” Biden said in Thursday night's debate.

For his part, Trump often ridicules the science behind increasingly urgent warnings for immediate action to stave off the worst of climate damage by cutting fossil fuel emissions.

But Trump's attacks routinely cite various Biden statements - several made during the Democratic primary campaign - to muddy that position.

At a recent Trump's rally in Erie, Pennsylvania, the president showed the crowd a video of various Biden comments on fracking in a bid to portray Biden as opposed to the process.

And that was days before Trump and Biden tussled over energy during the debate. After Biden noted he wanted to “transition away from the oil industry,” Trump pounced.

Trump will return to campaign in Pennsylvania on Monday.

America First Action, a pro-Trump super PAC, ran an eight-week ad campaign for TV, the internet and mail over the summer making that claim in a pitch to the hundreds of thousands of Pennsylvanians who work in the industry, see their businesses benefiting or receive royalties from a well on their land.

Trump's campaign is running its own ad this fall featuring a fracking technician named “Jen” who says Biden would end fracking and “that would be the end of my job, and thousands of others.” And Great America PAC, which supports Trump, produced an ad calling Biden and Harris “fracking liars.”

The onslaught is reminiscent of Republican efforts to turn union workers away from Democrat Hillary Clinton four years ago. Clinton was hammered for saying “we're going to put a lot of coal miners and coal companies out of business” when describing her climate plan, a comment that was used to suggest she had declared war on coal.

Still, most blue-collar unions that work in the gas fields in Pennsylvania have endorsed Biden. He has a long-standing relationship with some of them, and the endorsement is partly a reflection of their support for his infrastructure plan.

One of them - the United Association of Union Plumbers and Pipefitters - repeated Biden's statement that he wouldn't ban fracking in a Pittsburgh-themed digital ad that also touted Biden's support for nuclear power and water infrastructure as new sources of union jobs.

“Joe Biden will be the most pro-union president ever,” the narrator says.

While Biden insists he does not want to ban fracking broadly, he does want to stop issuing new drilling permits on federal lands, which federal agencies say accounts for about 10% of natural gas production and 7% of oil production.

As part of a $2 trillion plan, he also wants to make electricity production free of fossil fuel emissions by 2035 and reach net-zero carbon emissions in the U.S. by 2050 through technologies such as carbon capture sequestration.

Scientists say it is possible to achieve net-zero carbon emissions in the U.S. by 2050 without eliminating the use of fossil fuels.

But Biden's nearer-term goal of eliminating emissions from power plants is sending a shiver through Pennsylvania's industry because a growing fleet of natural gas-fired power plants is a big customer.

It's not clear how many votes are being decided by Trump's fracking claims in a contest where the vast majority of voters had already made up their minds.

The gas industry has flushed money into some local economies. But it has also inspired a backlash in other communities, most notably in Philadelphia's suburbs, and, for many voters, it simply doesn't rank as deciding factor in the race.

Still, in a heavily populated and heavily contested state that Trump won by just over 44,000 votes in 2016, any marginal change, no matter how slight, is significant, campaign strategists say.

Mark McManus, president of the United Association of Plumbers and Pipefitters, which has perhaps 2,000 to 2,500 members building a multibillion-dollar ethane refinery near Pittsburgh, said Biden has a record as vice-president when the Obama administration “basically fracked our way out of the recession.”

Plus, McManus said he had a frank conversation with Biden about fracking.

“He assured me that organized labour would be at the table, his energy approach would be an all-of-the-above approach and he is absolutely not against fracking,” McManus said.

A Biden backer, U.S. Rep. Conor Lamb, a Pittsburgh-area Democrat who has pushed back against the party's left wing on energy, recalled hearing concerns about Biden's position on fracking during events at union halls and elsewhere.

But, Lamb said he is satisfied with Biden's position on fracking and his commitment to blue-collar labour union jobs after three decades of Democrats losing clout among working-class voters in western Pennsylvania.

“He's picking up ground,” Lamb said. “We'll see how much he's picked up, but I'm definitely enthusiastic that he's out there fighting for it.”