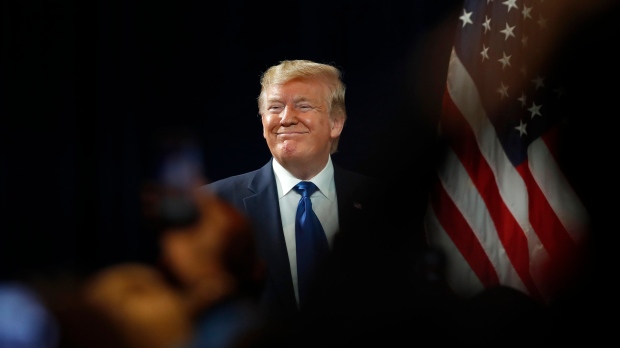 WASHINGTON - There was no hinting around, it was a straight-out trade, two key White House officials told impeachment investigators. If Ukraine's new leader wanted an Oval Office welcome from Donald Trump - and he did - he would have to open a public probe into the president's Democratic foe Joe Biden and his son.

“There was no ambiguity,” said Lt. Col. Alexander Vindman, an Army officer assigned to the National Security Council, recounting an extraordinary day of meetings at the White House last summer.

According to transcripts released Friday in the House Democrats' impeachment inquiry, Vindman and Fiona Hill, a former White House Russia adviser, both gave firsthand descriptions of scenes central to the congressional probe.

Vindman testified that Gordon Sondland, a Trump donor serving as ambassador to the European Union, told the visiting officials that if they hoped to win that coveted face-to-face meeting, “the Ukrainians would have to deliver an investigation into the Bidens.”

The Bidens? the House questioners pressed. In the White House Ward Room he mentioned the word “Bidens”?

“To the best of my recollection, yes,” Vindman testified. “My visceral reaction to what was being called for suggested that it was explicit.”

In another episode that day at the White House, Hill testified that Trump's national security adviser John Bolton “immediately stiffened” as Sondland “blurted out” that he had worked out with Trump's acting chief of staff Mick Mulvaney just that trade - the Ukrainians' probe for an Oval Office welcome.

“Well, we have an agreement with the chief of staff for a meeting if these investigations in the energy sector start,” Hill recalled -- a reference to the firm, Burisma, where Biden's son was on the board.

Then Bolton then abruptly ended the meeting.

Pressed on how it came to be that Sondland, a wealthy businessman who has become a key figure in the impeachment probe played such a pivotal role in Ukraine policy, Hill testified she was dismayed by the idea.

“He said he was in charge of Ukraine,” Hill recalled.

She testified that she challenged the new ambassador to the point of being admittedly “rude” to him. “Who says you're in charge of Ukraine?” she said.

“The president,” he replied.

The hundreds of pages of transcripts showed the investigation's deep reach into the White House ahead of next week's public hearings.

Vindman alerted superiors about the meeting he described and also after he listened to the July phone call in which Trump personally appealed to Ukrainian President Volodymyr Zelenskiy to investigate Biden and an outlier theory of Ukrainian interference in the 2016 U.S. presidential election.

A whistleblower's complaint about that call triggered the impeachment probe, which also focuses on allegations that Trump was holding up military aid to Ukraine, which fears aggression by its neighbour Russia, until he got a public declaration of the Ukrainian investigation.

Both officials are among nearly a dozen who have testified behind closed doors so far, and both said they were not the whistleblower.

Trump insisted earlier Friday he has not been damaged by testimony, and he and fellow Republicans complain the witnesses generally are relying on secondhand accounts of central events.

Speaking to reporters as he left on a campaign trip, Trump said he was “not concerned about anything” that has been disclosed so far.

He also distanced himself from Sondland, whom he praised last month as “a really good man and great American.”

“I hardly know the gentleman,” he said.

Despite Trump's dismissive comments, the new testimony, particularly the day of meetings July 10 at the White House, has become pivotal. It puts Mulvaney more directly involved in the shadow diplomacy being run through Rudy Giuliani, the president's personal attorney, and implemented by Sondland.

After Bolton left the one meeting, he told Hill to follow the group into the next and report back to him.

She testified that at the second White House meeting, Sondland “as I came in, was talking about how he had an agreement with Chief of Staff Mulvaney for a meeting with the Ukrainians if they were going to go forward with investigations.” She said she heard Sondland mention Burisma.

When she relayed what she heard back to Bolton, he called it a “drug deal” and told her to report it to the National Security Council lead counsel, John Eisenberg.

“This is a direct quote from Ambassador Bolton: 'You go and tell Eisenberg that I am not part of whatever drug deal Sondland and Mulvaney are cooking up on this, and you go and tell him what you've heard and what I've said.”'

Republican Rep. John Ratcliffe, a Texas Republican, sought to portray Trump's request for a favour in his phone call with the Ukrainian president as falling short of a demand.

“When the president of the United States makes a request for a favour, it certainly seems, I would take it as a demand,” he retorted.

Vindman, a veteran of the Iraq War, then added: “This was about getting a White House meeting. It was a demand for him to fulfil this particular prerequisite in order to get the meeting.”

Vindman also said he wanted to amend the White House's rough transcript of the call in three places, notably by filling in the ellipses when Trump was discussing CrowdStrike, the security firm that's central to the alternative theory of 2016 election interference and a server storing Hillary Clinton's emails.