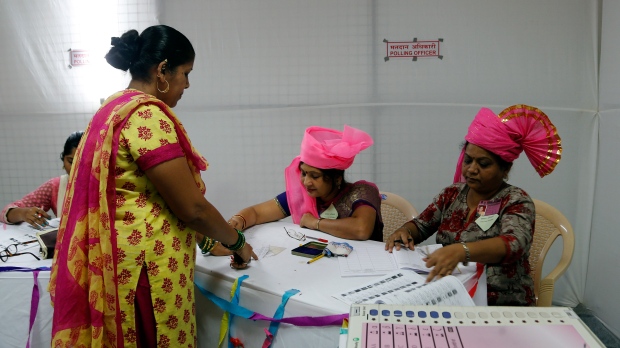 A woman checks her names before casting her vote at a polling station in Mumbai, Monday, Oct. 21, 2019. Voting is underway in two Indian states of Maharashtra in the west and Haryana in the north where the Hindu nationalist Bharatiya Janata Party (BJP) headed by prime minister Narendra Modi is trying to win a second consecutive term. (AP Photo/Rajanish Kakade)

The Bharatiya Janata Party is expected to win the elections in Maharashtra in the west and Haryana in the north after its dominant victory in national elections earlier this year.

Modi took to Twitter to urge voters to participate in large numbers and exercise their right to vote and "enrich the festival of democracy."

Voters were seen lining up to vote outside polling booths and getting their identities checked before voting in Mumbai, the capital of Maharashtra state, where a coalition between Modi's party and Shiv Sena is expected to retain power, according to opinion polls.

Being the home of Bollywood, celebrities were also seen outside polling stations in Mumbai to cast their votes.

The BJP's high-voltage election campaigning aggressively raised the nationalism plank by focusing on the government's scrapping of disputed Kashmir's special status in early August and targeting the opposition on national security and corruption. The party has pledged to work towards making the state drought-free.

Opinion surveys predicted a BJP romp in Haryana too, where its main opposition, the Congress party, could face a near decimation. Congress, however, is hoping to recover from its national election rout last spring and make a comeback in the state.

The traffic in Haryana was light as most people remained indoors. Voters said they were voting for issues related to employment.

"We want someone who is educated to rule our state and fix our problems," said Mohamad Sajid, a voter in Mewat district.

Others said that the government should fulfil the promises they make.

"Whatever good work is required, they (government) should complete it," said Irshad, who uses only one name.

The opposition tried to corner the BJP governments in the two states on the handling of the economy, with Congress leader Rahul Gandhi blaming the ruling party for an economic slowdown and unemployment. But the opposition campaigns were lacklustre due to infighting and desertions in the run-up to the vote.

The Congress party is going through a tough phase after it won only 52 of 542 parliamentary seats in the nationwide polls this year, compared to 303 won by Modi's Bharatiya Janata Party.

Votes in Haryana and Maharashtra will be counted on Oct. 24.