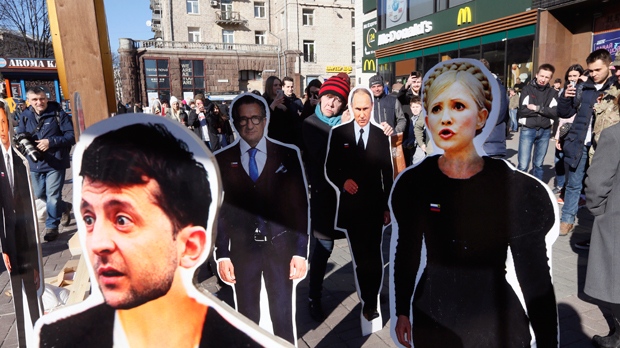 People look at the cardboard images of presidential candidates Volodymyr Zelensky, foreground, and Yulia Tymoshenko, right, in central Kiev, Ukraine, Thursday, March 28, 2019. A figure of Russian President Vladimir Putin behind them indicates that the two are treated as pro-Russian candidates. Ukraine will hold presidential elections on March 31. (AP Photo/Efrem Lukatsky)

KIEV, Ukraine -- Ukraine's interior minister has accused both the president and a former premier of waging campaigns that involve bribing voters ahead of Sunday's presidential election - a blunt claim seen as part of the increasingly vicious infighting in the top echelons of the Ukrainian government.

In a statement issued late Thursday, Arsen Avakov said his ministry is looking into hundreds of claims that campaigners for President Petro Poroshenko and former Prime Minister Yulia Tymoshenko were offering money to voters who would promise to vote for their candidate.

Both campaigns have repeatedly denied the accusations.

Opinion polls show Poroshenko and Tymoshenko trailing in the presidential race behind comedian Volodymyr Zelenskiy, who stars in a TV series about a teacher who becomes president after a video of him denouncing corruption goes viral. A runoff is likely as none of the candidates is expected to win an absolute majority in Sunday's vote.

Speaking at a campaign rally late Thursday, Poroshenko sought to play down the wide gap between him and Zelenskiy, and accused self-exiled billionaire businessman Ihor Kolomoyskyi of trying to prevent his re-election by supporting both Zelenskiy and Tymoshenko in the presidential vote.

“He has fled abroad, but he simultaneously moves two figures on the election chessboard,” Poroshenko said of Kolomoyskyi, who lives in Israel. He alleged that the tycoon wants to “to take revenge against the state” for the 2016 nationalization of his Privatbank, the nation's largest bank.

Zelenskiy and Tymoshenko have rejected claims that Kolomoyskyi is the funder and mastermind of their campaigns.

In an interview on the UNIAN news agency, Kolomoyskyi blamed Poroshenko for the nation's economic stagnation and expressed hope that he would lose. He denied funding any of the candidates, but hailed 41-year-old Zelenskiy as an upright, highly talented person capable of combating corruption and taking Ukraine out of its economic quagmire.

Many political observers have described Ukraine's election campaign as an effective duel between Kolomoyskyi and Poroshenko, who was on Forbes Magazine's list of billionaires with a net worth of $1.3 billion in 2014 before dropping off the following year.

Poroshenko, who made the bulk of his fortune from chocolate business, promised to divest himself of his assets upon becoming president in 2014 but never sold his empire.

“The confrontation between Poroshenko and Kolomoyskyi is a battle between members of the same oligarch species, cruel and cynical on both sides,” said Volodymyr Fesenko, head of the Penta Center, a Kyiv-based think-tank. “Kolomoyskyi has succeeded in creating a broad opposition front against Poroshenko that includes not only Tymoshenko and Zelenskiy but other bright opposition candidates.”

He noted that Poroshenko, who initially focused his campaign squarely on confronting Russia, has changed direction and unleashed biting attacks on Kolomoyskyi.

Both the president and his archrival rely on an arsenal of media outlets under their control to exchange blows.

Just days before the vote, Kolomoyskyi's TV channel aired a new season of the “Servant of the People” TV series starring Zelenskiy as Ukraine's leader.

The showdown between the two titans has drawn government officials into the battle, forcing them to take sides.

The minister warned that a tight presidential race could trigger unrest, saying that the candidates could cry foul and appeal to their backers.

“I'm worried, I see the potential for possible destabilization,” he said.

Fesenko said Avakov's statement signalled that he has fully bet against the president.

“Avakov has started to play openly against Poroshenko,” he said. “The stakes are rising as the vote gets near, and the risks for Avakov are becoming increasingly clear, so he decided to open his cards.”