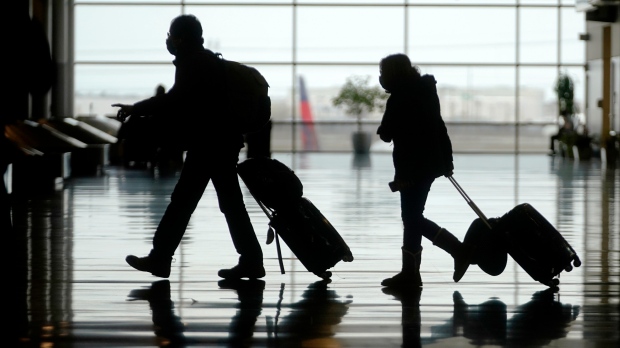 WASHINGTON, Aug 4 (Reuters) - The Biden administration is developing a plan to require nearly all foreign visitors to the United States to be fully vaccinated against COVID-19 as part of eventually lifting travel restrictions that bar much of the world from entering the United States, a White House official told Reuters on Wednesday.

The White House wants to re-open travel, which would boost business for the airlines and tourism industry, but is not ready to immediately lift restrictions because of the rising COVID-19 case load and highly transmissible COVID-19 Delta variant, the official said.

The Biden administration has interagency working groups working "to have a new system ready for when we can reopen travel," the official said, adding it includes "a phased approach that over time will mean, with limited exceptions, that foreign nationals traveling to the United States (from all countries) need to be fully vaccinated."

The extraordinary U.S. travel restrictions were first imposed on China in January 2020 to address the spread of COVID-19. Numerous other countries have been added, most recently India in May.

The official's comments were the strongest signal to date that the White House sees a path to unwinding those restrictions.

Last month, Reuters reported that the White House was considering requiring foreign visitors to be vaccinated as part of discussions on how to relax travel restrictions.

The official added the "working groups are developing a policy and planning process to be prepared for when the time is right to transition to this new system."

Some countries, including Canada and the United Kingdom, are relaxing or lifting restrictions for vaccinated Americans to travel.

The White House has held discussions with airlines and others about how it would implement a policy of requiring vaccines for foreign visitors. The administration must also answer other questions including what proof it would accept of vaccination and if the United States would accept vaccines that some countries are using but which have not yet been authorized by U.S. regulators.

The United States currently bars most non-U.S. citizens who within the last 14 days have been in the United Kingdom, the 26 Schengen nations in Europe without border controls, Ireland, China, India, South Africa, Iran and Brazil.

Currently, the only foreign travelers allowed to cross by land into the United States from Mexico and Canada are essential workers such as truck drivers or nurses.

Industry officials still think it will be at least weeks and potentially months before restrictions are lifted.

The restrictions have separated loved ones and prevented some people working in the United States from returning to home countries and others from coming for employment.

Last week, Reuters reported the White House was discussing the potential of mandating COVID-19 vaccines for international visitors. The sources said at the time no decisions had been made. The Biden administration has also been talking to U.S. airlines in recent weeks about establishing international contact tracing for passengers before lifting travel restrictions. (Reporting by David Shepardson Editing by Chris Reese and David Gregorio)