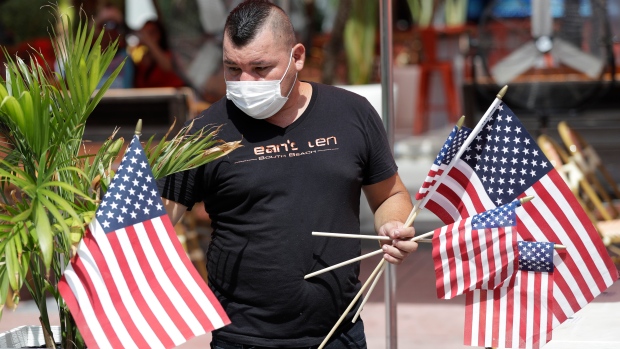 ST. PETE BEACH, Fla. - Florida and Texas reported record daily increases in confirmed coronavirus cases Saturday, the latest sign that the virus is surging in many parts of the United States, casting a pall over Fourth of July celebrations.

Officials and health authorities warned people to take precautions or simply stay home on Independence Day, as confirmed cases are climbing in dozens of states. The U.S. reported more than 50,000 confirmed cases on Saturday for the third day in a row, according to a tally kept by Johns Hopkins University.

The U.S. has more than 2.8 million confirmed cases - about a quarter of the 11 million worldwide infections, according to the tally, which is widely thought to understate the true toll, partially because of asymptomatic cases and limited testing. More than 525,000 people have died around the globe.

While the rise in cases in the U.S. partly reflects expanded testing, experts say there is evidence that the virus is also spreading more as states reopen their economies.

Deaths have begun to rise in some states that have seen a surge in cases - including Texas, Arizona and Florida - and the coming weeks will be telling. Still, some experts have expressed doubt that deaths will ever return to the peak of around 2,200 deaths per day, hit in mid-April, because of advances in treatment and because more young adults who are less vulnerable to serious complications are among those diagnosed recently.

In another worrying sign, the World Health Organization said member states reported more than 212,000 confirmed cases of COVID-19 around the world on Saturday, the highest single-day increase since the start of the pandemic. The Geneva-based organization said more than 60% of the confirmed cases reports it received were in the Americas, which includes the United States and Brazil.

WHO's count can differ from other global case tallies due to reporting delays.

The sobering updates came as local officials and health experts across the U.S. tried to minimize opportunities for the virus to continue spreading on a holiday weekend typically spent eating at backyard gatherings or crowding elbow-to-elbow to view parades and fireworks shows.

Many communities cancelled those events and cautioned people against gathering on their own.

Texas, which reported a record daily increase of 8,258 confirmed coronavirus cases Saturday, is retreating from what had been one of the country's swiftest reopenings. Much of the state began mandating face coverings Friday, with a $250 fine for scofflaws.

In Florida, which reported 11,445 confirmed infections on Saturday, bars statewide are shut down and some regional attractions, such as Zoo Miami and Jungle Island, have closed. Officials in South Florida - including in Miami-Dade County and the Florida Keys - closed beaches through the weekend.

Other beaches in the state remained open. At St. Pete Beach on the Gulf of Mexico, parking spaces were scarce Saturday afternoon and hundreds of people clustered in groups under umbrellas and in cabanas on the sand.

Deputies from the Pinellas County Sheriff's office patrolled on ATVs, telling folks they should stay with their own families or groups - and away from others.

Keisha Pereira came to the beach from Osceola County - more than 100 miles (160 kilometres) inland - with her daughter and two other children and said the group planned to stay away from others. She brought along hand sanitizer and masks in case they go anywhere other than the beach.

“We're going to stay with each other,” she said. “I feel pretty safe outside.”

In several of California's tourism-focused counties, economic woes prompted campaigns to convince state residents to travel within its borders. But public health experts and mayors of popular beach towns Santa Cruz and Half Moon Bay have pleaded with people to stay home for the holiday.

Crista Luedtke said demand has been “bonkers” since reopening the 14-room Boon Hotel and Spa that she owns in the Sonoma County town of Guerneville. Guests must stay at least two nights and are assigned chaise lounges near the pool.

“Tourism is not dangerous,” Luedtke said. “I think people not following the rules is dangerous.”

The holiday weekend coincides with a big step back this week for California's efforts to reopen the state's economy. Gov. Gavin Newsom ordered a three-week closure of bars and many indoor establishments in counties that are home to about three-quarters of the state's population. Law enforcement workers turned away disappointed sun-seekers from some beaches that have been closed to discourage large crowds.

Local efforts to discourage holiday gatherings are in stark contrast to President Donald Trump's weekend agenda, including a fireworks display Friday night at Mount Rushmore in South Dakota and Saturday's “Salute for America” celebration with a presidential speech on the White House South Lawn and an enormous fireworks display in downtown Washington.

In Britain on Saturday, some signs of normalcy returned as pubs and barbers reopened for the first time in months.

But other countries continued to report record highs in new confirmed cases, including South Africa and India. In Australia and northeast Spain, authorities ordered lockdowns for specific counties or communities aimed at stomping out increases in cases.

Authorities in the Bolivian city of Cochabamba said they are collecting about 17 bodies per day during the pandemic. Relatives of one apparent victim of the virus left his coffin in the street for several hours on Saturday to protest difficulties in having him buried.

Police Col. Ivan Rojas said the demand “is collapsing the police personnel and funeral workers” in the city of some 630,000 people.

The Andean nation has reported nearly 37,000 confirmed cases of COVID-19 and more than 1,300 deaths.

A mannequin wearing a mask is displayed with another outside a store on Miami Beach, Florida's famed Ocean Drive on South Beach, July 4, 2020. The Fourth of July holiday weekend began Saturday with some sobering numbers in the Sunshine State: Florida logged a record number of people testing positive for the coronavirus. (AP Photo/Wilfredo Lee)